This is the first of a two-part account of a rescue two weekends ago on Mt. Leconte. It’s based on a trip report written by Jon Holliday and a subsequent interview. Part two will run Thursday.

Jon Holliday and his buddies were amused by the guy lugging a beach chair and umbrella up the rugged five-mile trail to 6,594-foot Mt. LeConte last Saturday. What’s the deal? they asked. “I just want a comfortable place to sit and watch the sun set over Tennessee,” the fellow told them.
“We thought it was pretty silly at the time,” Jon recalled this week. “It turned out he ended up playing a pivotal role in all this.”
“All this” was the worst-case hiking scenario that would unfold a day later as Jon, who lives in Cary, Pete Sprague of Asheville, David Sprague of Boone and Scott Duffy of Charlotte headed back down the mountain. It’s a scenario that likely crosses every hiker’s mind at some point.
What happens when you fall in the backcountry and can’t get up?

An annual ritual
For the past five years, the foursome has hiked to the lodge atop Mt. LeConte for it’s last weekend before closing for the season. LeConte, on the Tennessee side of the Great Smoky Mountains National Park, is a popular destination in hiking circles: The cabins and lodge at the summit are accessible only on foot, and, despite the 2,800-foot vertical climb, it can take a year or more to score a reservation. This late in the season, though, the iffy weather can winnow the masses. Early this month, for instance, 22 inches of snow buried LeConte.
Last weekend for Mt. LeConte, though, was a bit of Indian Summer.
“The weather was great for November,” said Jon, “with blue skies and bright sunshine. Pete was hiking in shorts. We were even discussing the possibility of getting sunburned.” Ideal conditions — heading up, at least.
The four reached the summit, unpacked, had hot chocolate and caught up with friends from Kentucky and Indiana who also make it a ritual to visit Leconte at season’s end. They headed up to Cliff Top to catch the sunset, then had dinner and played cards in the lodge. Around midnight, they walked back to their cabin in rain and fog. 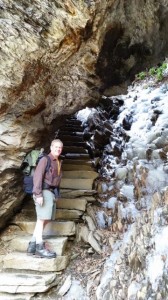 A change in the weather
“We woke up to more fog and rain and the wind howling Sunday morning,” said Jon. “We had expected rain and were prepared for our three-hour hike down, where we had a nice lunch waiting for us in the car.” Another weekend ritual: get to the car a little after noon, then feast on a smorgasbord of lunchmeat on French bread, chips and a beer or two. The kind of meal that tastes especially great after a mountain hike.
After packing up, putting on their rain gear and strapping on their microspikes, the four started down the mountain. The temperature was on its way into the upper 50s; someone commented on how much of the ice had melted. Good thing, since they already had a driving rain and winds gusting to 60 miles per hour to contend with.
As they continued down the mountain, David and Jon moved ahead. When the two reached Monotony Ridge, they figured they were about five minutes ahead of their partners. The wind and rain continued. On a couple of particularly treacherous sections they had to cling to anchored cables to stay upright.

Strong wind, heavy rain — then yelling
Around 10:45, despite the howling wind and driving rain, they thought they heard someone yelling.
“We could tell they were human voices, but we couldn’t tell what they were saying,” Jon said. That it might be one of their hiking partners didn’t occur to them: despite the conditions, there was a good deal of traffic on the trail. “The people who had stayed overnight were all heading down, and there was a crew heading up to close the lodge for the season.”
They could tell by the urgency and repetition of the yells, though, that someone was in trouble.
Jon and David headed back up the mountain. Eventually, they ran into hikers coming down the trail who told them Pete had fallen and may have broken his leg. When they made it back to their friends, Jon said it was pretty obvious Pete’s leg was indeed broken — both the tibia and fibula, it turned out. Ironically, the fall occurred on a flat stretch of trail with just one small but devastating patch of ice. Another hiker and his girlfriend who were on the mountain training to climb Mount Rainier, had taken control of the situation, calling park emergency personnel and initiating a rescue.
“Fortunately, we were in the one place where we could get cell reception,” Jon said.
They were two miles from the top, three from the bottom. The trail was rugged both ways. Jon said he knew immediately they were in for a long afternoon.

Thursday: A five-hour wait, then a four-hour descent.