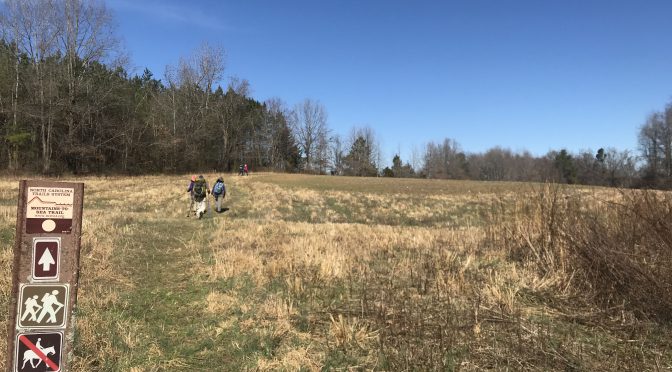 It started two weeks ago with a serenade by spring peepers in a pond at Horton Grove Nature Preserve. It was reinforced a day later by the sudden appearance of perky yellow daffodils near an old homestead along the Eno River. Then, last Friday, on a hike through bottomland forest at Ayr Mount in Hillsborough, I got the sign I’d been waiting for: a trout lily unfurling its delicate yellow and maroon petals. read more

Monday — never an easy time for the outdoors enthusiast. After a weekend of adventure, returning to the humdrum work-a-day world can make one melancholy. To help ease the transition, every Monday we feature a 90 Second Escape — essentially, a 90-second video of a place you’d probably rather be: a trail, a park, a greenway, a lake … anywhere as long as it’s not under a fluorescent bulb.
Today’s 90-Second Escape: Everybody Loves Umstead
Not only was parking lot full — which I had never seen before — but the road leading into Umstead State Park from I-40 was sidewalled with cars. “I’ve never seen it this full,” observed avid hiker Liz King, hiking the Company Mill Trail.
Impressive, but not surprising. It was a Saturday afternoon, there wasn’t a cloud in the sky and the mercury was zeroing in on 70. A good hiking day anyday, but especialy in January, when you never know when your next shorts-and-T-shirt day will come. And Umstead, located in the heart of the Triangle, is one of North Carolina’s most popular state parks.
So what’s it like when you need practically need a ranger to direct traffic over foot bridges? If you weren’t one of the hundreds at Umstead on Saturday, spend 90 seconds and take a look. read more