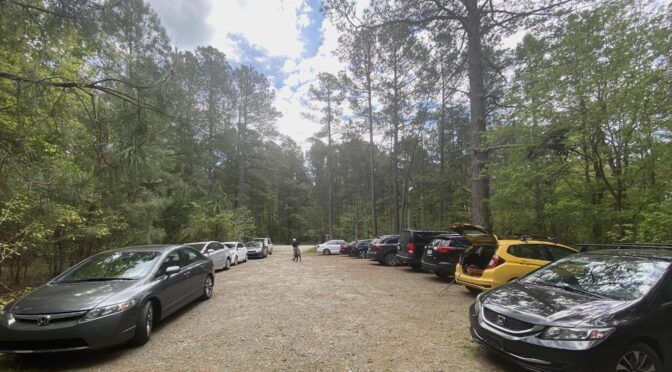 Sunday, we hiked a popular section of the Mountains-to-Sea Trail at Falls Lake. Popular, because there’s an actual parking lot at the trailhead — with an address. At 1 p.m., at the start of our hike, the lot was packed, with cars spilling over onto the road.

Is 2021 going to be a repeat of 2020, a year when just about everyone discovered hiking?

Then I took stock. Of the crisp spring air, of the clear sky, of the bluets popping up along the trail and the oaks and poplars and hickories leafing out above. It was the kind of day that traditionally has drawn just about anyone into the woods, pandemic or no. Of course the lot was packed. The question: Would it be in another month or so, when the temperature was sneaking into the 80s, when the air was thick with moisture and abuzz with biting creatures?

Last year we were forced to avoid indoor entertainment like, yes, the plague. The only safe place for us to retreat was the outdoors — and more people than ever did just that. National parks saw record attendance — even those that were forced to close for a month or more — as did state parks. The latter, in fact, often had to close their gates shortly after opening to keep too many people from gathering too closely. Some park visitors were content to queue up and wait an hour or more until someone left the park so they could get in. The outdoors is safe, we were told. So we took refuge there.

Now as spring blooms and as the number of Americans to get vaccinated grows — we’re at 25 percent as of this post — and as we can start to see an end to having to isolate and mask in public, the question is: Will the masses who discovered the outdoors in 2020 take up permanent residence? With the option of going to the neighborhood pool or to the movies or the mall, will people stick with the trail instead?

You will see more people on the trail this year than in years past, even as the quarantine eases, but not as many as last year. Not nearly as many. And you certainly won’t see them in the more remote places you most love to go.

One reason: the mass appeal of the outdoors last year was focused on the trails most accessible, those beginning at park visitor centers, for instance, where you tend to find the trails easiest to hike, the trails that are typically well blazed, well-maintained, less challenging. No creeks to rock-hop across, no boulder fields to navigate, no downed trees to climb over. The trails that just about anyone can do.

These trails are also easy to find because they typically have an address. Plug the address into your GPS, have a friendly voice dictate your every turn. No following sketchy directions given by a friend involving a “right turn at the farmhouse right out of the Waltons,” nor a left at the mailbox marked “The Barefoots” in barely-legible whitewash, no pretending not to notice the “No trespassing” signs. Gravel roads? I’m not taking my car down that, even if it is a four-wheel-drive SUV!

Another reason the trails won’t be as crowded this summer: the heat. Here in the Southeastern U.S. even avid hikers tend to avoid the trail come summer, at least at lower elevations. If you really long for those abandoned trails of yore, you’ll invest in good, breathable clothing, you’ll pack your water bottle full of ice, and you’ll enjoy. You’ll focus on trails along water, trails that are a little wider or that follow ridgelines to better capture breezes, trails with a thick canopy overheard to block out the sun (a good canopy can trim the temperature by 10 degrees).

Then there’s the big weed-out: restrooms. No restroom at the trailhead? (With running water, it shouldn’t need to be noted). That eliminates about half the potential hiking population. Might as well suggest taking a hike through Middle Earth, or to the place on the map marked, “Dragons be here.”

So yes, some people will be back, crowding the same places they crowded last year — the hiker-friendliest of trails. And that’s OK, because they aren’t generally the places we like to go. And if those are the places you’ve been going? Well, this could be the year to expand your horizons.

Expand your horizons in 2021

Some thoughts on escaping the crowds by expanding your horizons: 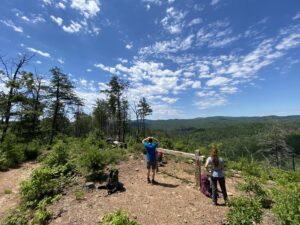 Become a backpacker. Backpacking is all about finding solitude, of being able to get deeper into the woods — and stay there. Our three-part Intro class includes an introductory gear session, a five-hour in-field training sessions, and a weekend graduation trip to South Mountains State Park. Our next class is in June. Learn more and sign up here.

Hit the game lands. Summer is the ideal time to explore our game lands because there’s no hunting. Often, you’ll find miles of gravel access roads closed to traffic that take you into some of the state’s best-kept secrets. One of our favorite places to explore: the Butner-Falls of Neuse Game Lands north of Falls Lake. Check out our guide to DIY exploring here. Learn about other game lands in North Carolina at the N.C. Wildlife Resource Commission, here. For tips and direction on exploring North Carolina game lands, check out our GetHiking! Southeast Podcast, Episode 3, interview with Brian McRae, Division Chief, Land and Water, with the NC WRC, here.

Check out our other trail guides here.

This week we talk about the trail outlook for 2021 in much the same way we’ve addressed it here today. Plus, learn about a new incentive program to lure adventurous types to West Virginia, access to the Dolly Sods Wilderness and more, by going here.