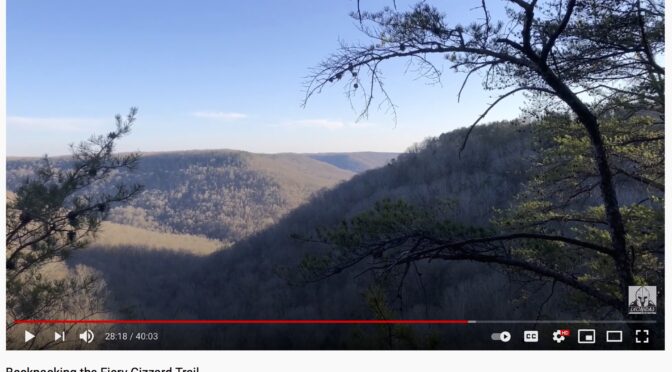 Wednesday Wisdom? That may be a stretch (though it is alliterative). Every Wednesday we share our thoughts in rotating subject areas: gear, social media, hiking/backpacking/camping resources, and tips from the field. These items are culled from our weekly GetHiking! enewsletter, which also includes news and information on hikes and backpack trips in our GetHiking! and GetBackpacking! universes. Subscribe to our weekly enewsletter here.

Lately, we’ve been smitten with the 287.6-mile Benton MacKaye Trail, which, like the Appalachian Trail finds its southern terminus at Springer Mountain, Ga., then runs north into the Smokies. Perhaps were taken with the BMT because it’s the focus of an upcoming GetHiking! Southeast Podcast, perhaps because it’s a bit of a mystery. When a trail is a mystery, one of our first steps in trying to debunk said mystery is to watch YouTube videos. Here are three that we’ve found make a nice introduction:
Leonides: 7-day, 7-part series. The daily videos are in the 15- to 30-minute range and take a chronological approach, which is especially good if you may only be able to hike portions of the trail. Helpful, too, because his series is recent, shot in late 2020. Find it here.
JBenHikes: I can do that trail in six episodes, JBenHikes appears to proclaim. These episodes tend to be a little shorter, with more emphasis on scenery than chatting. The beginning of his last episode in the series shows that thru-hike aren’t all sunny escapades: he reports in the wee hours from his tent, which is being buffeted by intense winds atop Mt. Sterling in the Smokies. Especially good video quality. Also shot late last year. Find it here.
Evan’s Backpacking Videos: 14 episodes. Evan’s series starts with planning and training videos before getting on the trail. Each episode also has a theme (“Making Outdoor YouTube Videos with an iPhone 6,” “The Doctor Knows Best About Blister Care”), which adds an additional bit of info to each episode. Lots of great information about the trail and the experience of thru-hiking it peppered throughout. One downside: it was filmed in 2016, making it nearly four years old. Find it here. 03.25.2021

As Evan of Evan’s Backpacking Videos notes at the beginning of his 46-minute 8-second video of his thru-hike on the 77-mile Foothills Trail, the trail appears to be misnamed: the term “foothills,” he argues, suggests ease. This is not, he states up front, an easy trail. He also suggests it might not be a trail to attempt in bad weather. Shot in mid-March, the information is fresh. Begin the adventure with Evan here. 04.02.2021

One reason — the main reason — I watch outdoors videos on YouTube is to learn about new trails, trails I otherwise might have no idea of knowing about. The Fiery Gizzard Trail in Tennessee, for instance. The trail, northwest of Chattanooga, is in the Grundy Forest State Natural Area of South Cumberland State Park. While it’s listed as 12.5 miles, it can be paired with other trails for longer routes. The route taken in the 40-minute video by videographer Leonidas is about 19 miles. Leonidas provides spare but helpful commentary; for the most part, though, he lets the video and still pictures tell the story of Fiery Gizzard. If you like rocky terrain, moving water and views, Fiery Gizzard may be a good destination. Check out his video here. For different perspectives on the same trip, check out videos by Leonidas’s hiking partners, Gone Feral with Squidly, here, and JBenHikes, here. 04.02.2021

Technically, the “The Ginger Runner” YouTube channel is about trail running. But isn’t trail running really just fast hiking? Among the things we love about “The Ginger Runner”:
Shoe reviews. If you’re into lightweight hiking shoes, you will find no better source of information than “The Ginger Runner” reviews of trail running shoes. Recent reviews include The North Face Flight Vective, TNF’s Vective Endurance, the Saucony Peregrine 11, the Hoka One One Mach 4.
Great trails. A recent favorite, the 93-mile Wonderland Trail circumnavigating Washington’s Mount Rainier. So what if the episode is about recent attempts to set new FKTs (fastest known times; 18 hours, 49 minutes, 11 seconds for the Wonderland!), but you get to see the entire trail, some of it at night!
Life on the trail (albeit in the fast lane).
Great visuals. The camera work is exceptional, as is the storytelling.
Check out The Ginger Runner YouTube videos here. Also available in podcast form here. 03.18.2021