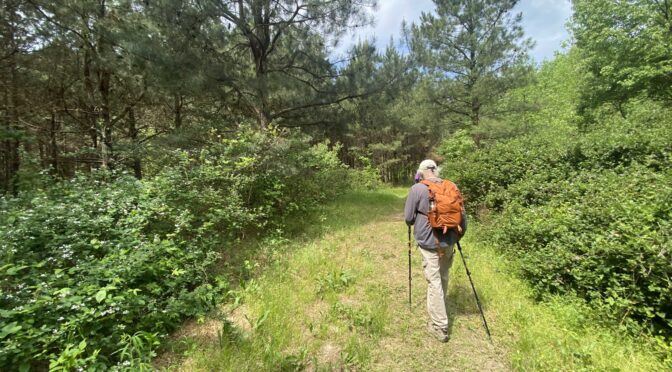 Last week we were hiking along the Eno River on a sunny, hot day: sunny, as in lots of azure amid a few harmless, billowy clouds; hot, as in seasonable, around 90. And yes, quite humid. A typical summer’s day. I loved it.

Why? It reminded me of being a kid.

Summer has long meant vacation, but never was the connection as clear as when we were kids. When it started to get hot, the school year ended. Nine months of being cooped up in an institutional building, then, freedom. Heat immediately became our friend. Good timing, especially since our schools weren’t air-conditioned. Besides, why waste such great weather indoors? So we spent the summer, the entire 12 weeks, outside. In the sun and the heat in the pursuit of happiness.

Typically, that happiness was found by heading to the nearest woods, hopefully finding a good water source. I’m not going to “back-in-my-day” you because that gets old fast. And frankly, I’m sure my recollections would be embellished with time. But I know it was great because every time I head out on a steamy summer’s day as an adult, I get that tingly feeling of being a kid with no worries in the world. Granted, I’ve had to make an adjustment or two over the years:

Oddly, despite being bathed in sweat on a summer outing, there’s a certain weightlessness that accompanies such a venture. You were never more carefree than you were as a kid on summer vacation. And it wasn’t the fact that you were always in “go” mode. It was the one time you were free to do whatever you pleased.

Recapture that summer vacation verve as an adult: Take a summer hike.

OK, so maybe it was a little easier to take the heat as a kid. But by following a few small suggestions, you can mitigate the heat. You can find those suggestions in our GetHiking! Guide to Summer Hiking, here.