View cart “GetBackpacking! Mount Rogers: A Basecamp Backpack Weekend” has been added to your cart. 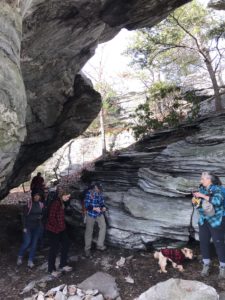 If you know Hanging Rock State Park, you’ve probably never contemplated the prospect of exploring it without seeing another soul. On this off-trail GetHiking! Winter Wild exploration of Hanging Rock’s eastern extent, you’ll climb four peaks and likely not see anyone outside our small group. 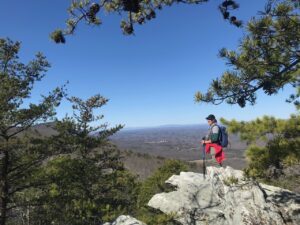 Of the various sub-mountain ranges in the North Carolina piedmont, the Sauratowns are the most prominent. The Uwharries may cover more acreage, but the Sauratowns are more than twice as high, with seven peaks topping 2,000 feet. That doesn’t seem like much until you consider the surrounding countryside is only about 800 feet above sea level; in the case of Moore’s Knob, the highest point in the range at 2,579 feet, that’s nearly an 1,800 foot elevation difference.

That no doubt contributes to why the Sauratowns, anchored by Pilot Mountain to the west and Hanging Rock to the east, are such a draw for folks in the Piedmont, especially in the Triangle: in an hour and a half you can be in a mountain-like setting.

Hanging Rock in particular has it all: five of the park’s craggy peaks top 2,000 feet and the  park is rich with waterfalls. The rhododendron, mountain laurel and galax commonly associated with the Southern Appalachians to the west and north, are common here. You’ll find hemlocks as well. When people in the Triangle and points east need a quick mountain fix, Hanging Rock is a relatively short drive. And it can get crowded.

But not when you’re exploring Hanging Rock’s Three Sisters — the trio of peaks (plus a black sheep fourth peak) at the far east end of the Sauratown range. On this hike, we go off trail, entering from the park’s far east end and topping four peaks before turning around just shy of the crowds.

Where: We will meet at a trailhead on the far east end of the park, in the town of Danbury.

What: This is an out-and-back hike covering about 6.4 miles total, all of it off trail (though much of it on old roadbeds). Difficulty rating is Moderate, due to several climbs (none too long) and some mild scrambling.

There are no reviews yet.