A settlement reached earlier this week between Raleigh and the owners of a quarry along Crabtree Creek means the city can finally proceed with a 2- to 3-mile extension of the Crabtree Creek Trail into Umstead State Park. The extension will create a roughly 18-mile paved greenway along Crabtree Creek from Umstead to Raleigh’s 28-mile Neuse River Trail.
“It’s the last missing piece,” Vic Lebsock, Raleigh’s senior greenway designer, said this morning.
The Crabtree extension had been held hostage in a battle between the city and local homeowners and Hanson Aggregates, which owns the Crabtree Quarry. Local residents didn’t like the blasting required to mine the rock; Hanson had a lot more rock it wanted to mine. (Read more about the settlement here.)
The settlement ends a 20-year dispute and clears the way for design to begin on a trail that Lebsock says has its “difficult aspects.” Foremost among them: On the east end the trail will need to climb up from Crabtree Creek to avoid a stretch of land Hanson will be allowed to quarry for about another 40 years.
“We’ll need to design-in switchbacks and make the trail handicap accessible,” Lebsock says. The  greenway will climb for about a quarter mile along Duraleigh Road, then follow a ridgeline across to Richland Creek, where switchbacks will again be employed to take the greenway down to Crabtree Creek. From there, the greenway will continue to Umstead.
There is currently no funding for the project, estimated to cost about $3.5 million. But that appears to be a temporary concern.
Lebsock says he’s currently pulling together “residual funds” from other greenway projects to fund the design element. He expects the design to begin by summer, with construction possibly beginning by summer 2015.
“That would be really aggressive,” says Lebsock. But if it happens, the trail could possibly be done by the end of next year. 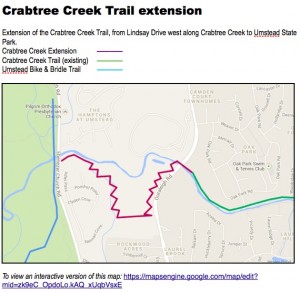 Another project amid the building boom

Aggressive, too, considering Raleigh is in the midst of a greenway building boom. Consider:

What will happen when Crabtree Creek Trail reaches Umstead?
“The interesting conversation now is what to do with Umstead,” says Sig Hutchinson, current chairman of the Wake County Open Space and Parks Advisory Committee, a past president of the Triangle Greenways Council, and the Triangle’s leading greenway advocate.
“It’s just a trail on the other side of Ebenezer Church Road,” Hutchinson says of where the paved Crabtree Creek trail will meet the gravel Umstead bike and bridle trail, “and there is no doubt that this is going to be a major communing route  … .”
Umstead and its bike and bridle trail serve as a key greenway hub. To the south, the Umstead trail links with the Reedy Creek Trail and additional Raleigh greenway that run through Meredith College, N.C. State University and the Dorthea Dix property before meeting the Walnut Creek Trail. And to the west, Umstead’s bike and bridle trail links with Cary’s Black Creek Greenway, which runs 7.1 miles to Bond Park — and a connection with the White Oak Creek Greenway, which nearly links with the 20-mile American Tobacco Trail, which is one official bridge opening away from running into downtown Durham.
But back to Raleigh.
With all that work in progress, all those key links pending, it seemed reasonable to ask Lebsock if the new Crabtree Creek extension to Umstead was much of a priority.
He laughed.
“It’s number one now.”