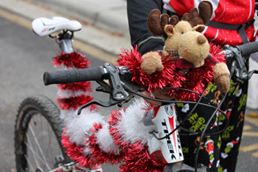 Typically, we think of benefit rides and fundraising runs as the work of big nonprofits, of a team engaged in pulling off a major event. The MS Society of Eastern North Carolina and the 2,000-plus-rider MS 150, the American Diabetes Association’s likewise behemoth Tour de Cure.

Some, though, are pulled off through the vision and drive of one key person. The Raven Rock Ramble, instance, an annual May century ride that Cary’s David Cole, a kidney transplant recipient, started in 2002 to raise money for the UNC Kidney Center (it’s raised more than $150,000 in its 12 years). Or the Miracle Mile, held every September in downtown Raleigh to raise money to cure motor neuron diseases such as Primary Lateral Sclerosis and ALS, a k a Lou Gehrig’s disease. The remarkable Sarah Witt, a former runner who has PLS, started the Miracle Mile in 2006; it as since raised more than $450,000.

And, on Dec. 13, we have the 5th Annual Tour de Toys, which Camye Womble started to  raise money for kids who might not otherwise have toys to unwrap this holiday season. Price of admission: one new, unwrapped toy that will be given to families at The Women’s Center of Wake County.

While the goal of this ride is worthy enough, another recommendation for this ride is that it’s a ride for everyone, not just the hammerheads who can crank out 64 miles in a couple hours. There’s a 12-mile route, and if that’s too much, you have the option for a six-mile-ride as well. The rides start and finish at Natty Greene’s Brewing Company in downtown Raleigh, each has a ride leader to make sure you stay on the course, each has a sweep to make sure you don’t get left behind. The unwrapped toy admission includes two adult beverages for adults at the finish, kid-appropriate beverages for the under 21-set. You need a bike, you need a helmet, you need a cool, unwrapped toy, you need to show up around 9:30 a.m. (the ride starts at 10 a.m.). Is there a better way to spend the second Saturday morning in December?