As of 9 a.m. on Friday, the prospects for cross-country skiing were grim in the Triangle: the nearly six inches of snow forecast the night before — the minimum amount creating a sufficient base on some trails — had taken more the form of ice, a surface good for little more than hockey and busting your keister. But hey, it’s still early in this weather event dubbed Jonas.

So we’ll go ahead and optimistically resurrect our list of places to cross-country ski in the Triangle. And we’ve updated it to include spots in the Triad and Charlotte, where the prospect for Nordic skiing were more promising. Again, this is an update of a piece that originally ran on Jan. 28, 2014, and can now be found on our cross-country skiing site on our home page. 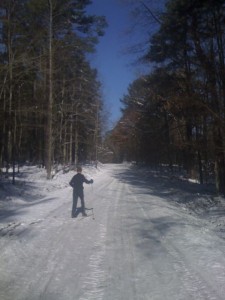 I’d just finished a gorgeous day on the groomed trails at the White Grass ski touring center in West Virginia and was returning my rental equipment.
“How was it?” asked the ski rental guy.
“Incredible!” I oozed. “I can’t wait to go again.”
“You know,” he said, “Our rental skis are for sale.” At a price, it turned out, that was more than I could afford but too good to refuse. I’ve used them a dozen times since; I’m hoping to make it a baker’s dozen tomorrow.
As Winter Storm Leon (sheesh) makes its way up the coast, the prospects are good for cross-country conditions, from the Triangle into the coastal plain. As of this morning, parts of the Triangle were expected to get up to six inches of snow — with points east forecast to get 10 inches or more.
On the right kind of trail, six inches is all it takes to make or decent cross-country conditions. Where might one find the right kind of trail?
Glad you asked.

Because of the rocks and roots found on most trails in the Triangle, you need a substantial amount of snow — 10 inches minimum — to ski. There are some exceptions, however:

Umstead State Park
Raleigh
The 13 miles of bike and bridle trail here offer the perfect base for six-inch conditions. A finely crushed gravel, the surface is devoid of the rocks and roots common on most trails hereabouts, thus, fewer imperfections to cover up. If you’re not comfortable with downhills, pick up the trail via the neighborhood entrance off Old Reedy Creek Road from Lake Crabtree. There, you’ll find more than two miles of flat trail before the rollers begin.
More info here.

Duke Forest
Durham, Orange and Alamance counties.
The fire roads here aren’t quite as surface-friendly as at Umstead, but they’re close. And there are lots of ‘em: the seven individual tracts making up the forest contain 7,020 acres and are accessed via 45 entrances. Learn more about the forest and where you can find helpful maps, by going here.

Al Buehler Cross Country Trail
Durham.
The 3.1-mile Al Buehler Trail has a foot-friendly natural surface similar to that at Umstead. It’s also got some rollers, making for some nice downhill action and some heart-pumping climbs.
More info here.

American Tobacco Trail
Wake, Chatham and Durham counties
At 22 miles, the ATT offers the prospect of long, contemplative escapes. It’s surface is finely crushed stone and because it follows an abandoned rail line, the trail is great for beginners or folks who haven’t been on skis in a while.
More info here.

They’re relatively flat, their surface is smooth and because they snake throughout the region, they are generally accessible without a lot of time spent on icy roads. Here are some of the larger greenway networks in the area, which a quick snapshot and where you can go for more information, including how to find the greenway nearest you. You can also find maps, directions and detailed information about local greenways on GetGoingNC’s Greenway Guide.

Durham. In addition to the northern end of the American Tobacco Trail, Durham has several other greenways suitable for skiing, including the Third Fork Greenway.
More info here.

Raleigh. The capital city’s Capital Area Greenway System now has more than 100 miles of greenway, the spine of which is the 28-mile Neuse River Greenway. Lots of good opportunity for Raleigh residents.
More info here.

Howell Woods Environmental Learning Center, Four Oaks. Located just east of I-95, Howell Woods is in Leon’s sweetspot, with snowfall totals in the double digits possible. With 15 interconnected trails (the longest of which is just under a mile) navigating a variety of ecosystems, Howell Woods could be the nordic center of North Carolina in a few hours.
More info here.

Alas, if you’re intrigued but don’t have skis and wonder where you can rent them, the closest place — and only place in North Carolina — is the Pineloa Inn and Ski Shop in the mountains.

Guilford Courthouse National Military Park, Greensboro. This inner-city park has several miles of trail, much of which is smooth and wide, permitting skiing on a minimal amount of snow (4″ – 6″) and easy passage of those out for a snowy stroll. Your mileage is easily doubled because it’s so easy to get lost here. More information and directions, here.
Salem Lake, Winston-Salem. The 7-mile, natural-surface trail encircling Salem Lake is ideal for cross-country: it’s wide, it has a smooth surface, and — most attractive to the novice — it’s flat. Another advantage: it’s centrally located, about 10 minutes from downtown, meaning the roads leading in have a better chance of being in reasonable shape. More information here.
Hagen Stone Park, High Point. Hagen Stone’s 3.1-mile cross-country course hosts some of the top high school and collegiate races in the region. It’s a course revered for its sylvan setting and for its rolling, in spots, challenge. With 4 to 6 inches of snow, it makes for a wintry escape; add a few more inches and you expand your range on the park’s hiking trail. More information here.
Charlotte area
McAlpine Park Greenway, Charlotte. With a coating of snow, what’s known as one of the best cross-country running courses the rest of the year becomes the best place to cross-country ski in Charlotte. The 3.1-mile route is smooth, flat, fast, and intermingles with additional trail that may be ski-worthy with a bit more snow. More information here.
Anne Close Springs Greenway, Fort Mill, S.C. If the snow drops below the state line and you can get to Fort Mill, prepare for a rare day on the most extensive cross-country networks not just in the Southeast, but along the East Coast. 35 miles of trail that exposes you to a mix of great natural and human history. More information here.
* * *