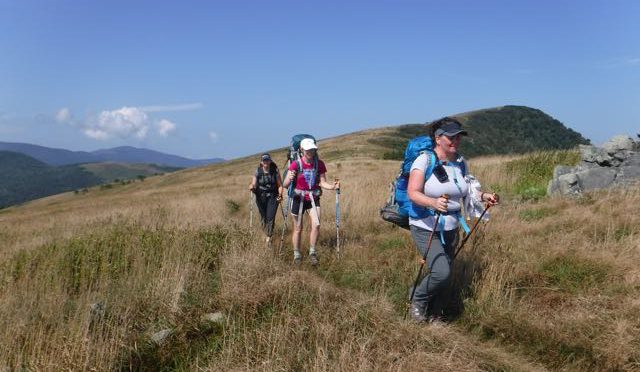 We’ve got one backpack trip left in 2019 — this weekend, to the Birkhead Mountain Wilderness — but already we’re looking forward to next year. We’ll be visiting some of the same places, the places you’ve demonstrated that you love to explore. But we’ll also be exploring new terrain, and adding a new component that we’re especially excited about. First things first, the first four months of 2020.

Every winter for the past three we’ve held a series of monthly winter trips. We continue that tradition with our annual full-blown winter excursion on the Appalachian Trail between Max Patch and Hot Springs in January. The first year we did this hike we had to postpone it because the forecast called for overnight lows in the single digits and as much as two feet of snow. On the make-up trip three weeks later it got up to 70 degrees (and no snow). That’s what you deal with on a winter backpack trip in the Southern Appalachians.

We also do at least one winter trip to the coast. Traditionally, this has been on the 20-mile Neusiok Trail in the Croatan National Forest east of New Bern. But the trail was closed last year due to hurricane damage, so we switched gears and opted instead for Merchants Millpond State Park, which is where we will again head, in February. This will be one of our basecamp hikes: we hike in full pack 3 miles to camp Friday night, do a 10-mile day hike Saturday, hike out 3 miles in full pack Sunday. This is swamp-like backpacking that can only be done in winter.

And because the Neusiok Trail is so popular, we’ll be returning in March, the first week, right before the forest’s flying and biting critters return to action. Lots of pine savannah on the first three-quarters of the hike, a surprisingly rolly and ecologically diverse stretch the last quarter.

Something old, something new

In April, we repeat our most popular trip, the 14-mile run of the AT from Carvers Gap north to U.S. 19E. We start with three balds, hit another two three-quarters of the way through. In between, it’s pretty spectacular scenery as well.

Also in April, a new destination: Shining Rock. This 18,483-acre designated wilderness is near  the top of most Southeast backpacker’s to-hike list. It’s got wide-open spaces offering great views, scrambling atop the massive white quartz outcrop that gives the area its name, and two 6,000-foot summits.

If you’re reading this and thinking, Dang! Wish I were a backpacker, we’ve got that covered as well. Our spring GetBackpacking! Intro to Backpacking session will be in March. We’ll hold two-hour gear sessions in Charlotte, the Triad and the Triangle the week of March 10; a comprehensive five-hour training session at Morrow Mountain State Park on March 14, and a graduation weekend at South Mountains State Park March 27-29. We’ve got loaner packs, tents and stoves, to help minimize the initial cost of getting into backpacking.

That’s because there’s almost always some trail left. Those AT trips we have planned? Sure, they’ll be fun — but we’ll be getting off the trail with more than 2,100 miles of trail left. Even after a great trip, it can make a soul a little melancholic knowing you’ve left some trail untrod. Of course, the other side of that equation is: Who has time to do a thru-hike?

You do, it turns out.

In 2020, we’ll be doing four thru-hikes on North Carolina Trails, Trails you’ll be able to do and say, Yup, did that — the whole thing. Here are the trips:

Neusiok Trail, Croatan National Forest. Our March visit (see above) will be your first chance in 2020 to hike an entire trail with us, from Oyster Point to Pine Cliff, all 20 miles. Three days, two nights. March 6-8.

North Carolina Bartram Trail, Nantahala National Forest, 60.2 miles (with another 5 to get back to the trailhead). The North Carolina portion of the Bartram Trail extends from the Georgia line to Cheoah Bald, with some great views, two balds, the Nantahala River and one wild stretch coming up from the Nanty to Cheoah. 6 days, 5 nights. Mid-summer.

We’ll have dates for the Art Loeb, the N.C. Bartram and Foothills trails shortly after the first of the year.

We’ll be adding more trips in January: a summer visit to Joyce Kilmer, our fall Weekend Quick Escapes series, possibly more. We wanted to let you know about these trips before you began parceling out your 2020 vacation time. Hopefully, this makes that task easier.

For more information on the trips mentioned above, click the appropriate link below: