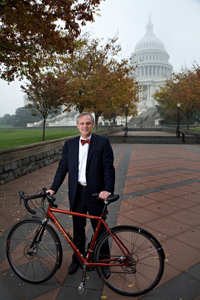 For a guy who’s dedicated his life to public service and is perhaps the politician most closely associated with forward-thinking transportation policy, Rep. Earl Blumenauer, D-OR, says it’s not elected officials who drive progressive thinking when it comes to creating livable communities.
And Blumenauer knows livable communities, having lived his life in one of the nation’s most living-friendly — Portland. He went to Portland’s Lewis & Clark College, served in the State Legislator, was a Multnomah County Commissioner, served on the Portland City Council, was Portland’s Commissioner of Public Works, and has served in the U.S. House of Representatives, where he’s currently on the Ways and Means and Budget committees. And he’s played a pivotal role in Portland’s transformation from another American city beholden to pavement into a city that now:

It’s a scenario that a growing contingent of Triangle residents would love to see happen here, and a large contingent of that contingent turned out Thursday at appearances in Durham and Raleigh to hear Blumenauer describe Portland’s transittopia — and how the city got there. The “how it got there” part was surprisingly straightforward — and encouraging.

“Fifty years ago, Portland was a typical medium-size American city — in a gorgeous setting,” he said. “We were in violation of air quality standards one day out of three. The downtown-think was to tear down historic buildings for parking lots.” The city, he added, was caught up in the Robert Moses-inspired urban renewal trend of the late 1960s that resulted in hardship for many urban centers. (See Durham’s Hayti community.)

But then, said Blumenauer, something happened. While the mayor, the council and business leaders were pushing expansion of a major highway downtown, the people said no — and won. That highway became Pioneer Courthouse Square, a 37-acre park that’s a popular downtown gathering spot. The trend continued (and caught on statewide), downtown prospered and alternate forms of transportation took hold (the city now has 79 bus lines and 14.7 miles of commuter rail line).

“There’s a rumor that Portland declared war on the car, that it’s all socialist engineering,” Blumenauer added. “We didn’t declare war on the car. But we didn’t surrender to it.”

Because 40 years ago the people of Portland decided not to surrender to their elected officials.