The Triangle is two ramps away from having a 60-mile hiking trail.
Just before Christmas, contractors using a really big crane lowered a steel bridge onto concrete footings spanning Little Lick Creek at Falls Lake. The bridge will join Sections 14 and 15 of the Falls Lake portion of the Mountains-to-Sea Trail, and will make it possible  hike undisturbed from Pennys Bend on the Eno River in Durham County downlake to the Falls Lake dam in Raleigh — when it’s completed.
“When it’s completed,” because there’s still the matter of those two ramps. While Little Lick Creek lives up to its name, it’s in a floodplain that is wide. Thus, the bridge’s deck sits about seven feet off the ground, and lead-up boardwalk ramps are required.
“The contractor has until February 10 to install the ramps,” Friends of the MST Executive Director Kate Dixon said yesterday. “But I think it will be done before that.”
Initially, the plan was to save money by having volunteers build the bridge. (Except for more involved projects such as this, the 1,000-mile-long statewide trail, a little over half of which is completed, is being built by an army of volunteers.) But Dixon said they had money left over from the two grants used to fund the bridge — $150,000 from the state’s recreational trails program and $55,000 in Durham open space funds — so they decided to hire the work out.
A formal dedication ceremony is scheduled for May 19.
While the 60-mile trail will be one of longest urban trails in the nation, it’s just over a third of what the trail eventually will be. On its journey from 6,643-foot Clingman’s Dome on the Tennessee border to Jockey’s Ridge on the Atlantic, the MST will spend 150 miles in the Triangle, running from Clayton in Johnston County to Hillsborough in Orange County. That entire 150-mile stretch could be completed next year.
A progress report, from east to west: 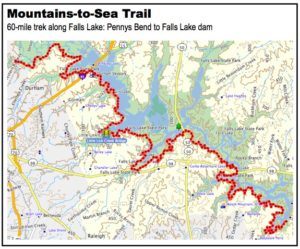 Considering the trail’s growing momentum, aided in large part by Raleigh and Wake County’s move three years ago to fast-track the Neuse River Trail, Dixon is optimistic about the trail’s immediate prospects.
“I think we’ll have a 150-mile trail in the very near future.”