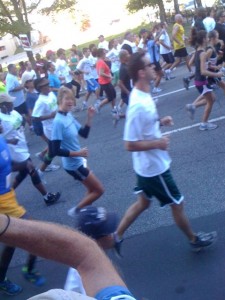 I wrote the following for the Charlotte Observer and The News & Observer in Raleigh; it appeared in both papers on Tuesday, Sept. 17. It runs here with links. Check out my personal take on Chi Running, which I wrote about last week.

The best way to get the most out of running?

“Look at the way you used to run as a kid,” says Pat Reichenbach of Angier. “They’re constantly taking quick steps and leaning forward to let their body, not their legs, do most of the work.”

In a way, carefree children have been pioneering what is emerging as the next big thing in running: Chi Running.

Chi (pronounced “chee”) Running borrows from the Chinese martial art form of tai chi and is becoming increasingly popular for everyone from beginners launching into their first zero-to-5K program to longtime runners frustrated by successive injuries.

It’s a good pitch considering that an estimated two-thirds of runners suffer an injury serious enough to curtail their training in any given year.

“It was life-changing,” said Amy Peacock, 42, who endured a litany of common running injuries – shin splints, heel pain, plantar fasciitis – after running her first marathon in 1997.

The Charlotte woman heard about Chi Running in 2005, attended a clinic and hasn’t been injured since. She became so enamored of Chi Running that she became an instructor in 2006 and works with everyone from long-time, competitive runners to newbies in a zero-to-5K program she began teaching last week at the YWCA Central Carolinas in Charlotte.

To the uninitiated, its ties to tai chi may suggest an eastern philosophical bent, but really it’s about common sense and good form.

As Chi Running founder Danny Dreyer, of Asheville, says, “Running does not cause injury; incorrect or inefficient running technique is the true culprit.”

“It’s a very efficient approach that made a whole lot of sense to me,” says Dan Heyl, a Raleigh engineer who attended a Chi Running clinic two years ago.

“You don’t think twice about good form being essential for golf and tennis,” says Reichenbach, who, like Peacock, became an instructor shortly after taking the course. “Why not running?”

Chi Running’s approach is based on six key principles:

• Correct alignment and posture. Much of the instruction focuses on getting your body in line while running to avoid injuries associated with certain parts of the body absorbing too much of the running load.

• Landing with a mid-foot strike. This dovetails with the premise of Christopher McDougall’s 2009 best-seller, “Born to Run,” which is widely credited with sparking the current running revival.

Runners became injured, McDougall wrote, because plush running shoes promoted a heel-strike stride that was the antithesis of our natural running form and encouraged injury. The foot’s bone structure, McDougall and Chi Running proponents agree, is built to handle the pounding of a mid-foot strike.

Many Chi runners tend to use less-padded shoes than traditional runners.

• Using a “gravity-assisted” forward lean. The big advantage here: Leaning forward lets you take advantage of gravity, which saves energy. It’s not so helpful on uphills, but a noticeable plus on flats and downhills, say practitioners.

“It’s tremendously helpful on downhills, says Tim Whitmire of Charlotte, who with the help of Chi Running has resumed his quest to run a marathon in all 50 states (he’s currently at 26). “I release myself and let gravity take me downhill.”

• Engaging core strength for propulsion, rather than relying on leg strength. This concept gets a little more physiologically esoteric, but basically by engaging your core by sucking in your stomach and tightening your abdominal muscles, your core assumes a greater workload, keeping your legs fresh.

• Maintaining a short stride and quick cadence. Doing this does several things, say instructors. It encourages a mid-foot strike, it keeps your center of balance over your feet (especially helpful for trail runners, says Peacock, who are more prone to tripping on tree roots and rocks), it makes hills easier and it puts less stress and demand on the leg muscles.

• Connecting the mind and body. For most runners the transition to Chi Running doesn’t happen overnight. “It’s a lot to learn at one time,” says Reichenbach, whose workshops generally last five hours.

He says the scan is quick and doesn’t detract from his run. “It’s not a distraction. It’s very quick. It’s like a finger snap.”

In addition to reducing injuries, Chi Runners say the approach enables them to run longer and more frequently. Perhaps more importantly, though, a passion that due to injuries had devolved into a labor of love has dropped the downside.

It’s also given Heyl, who recently turned 50, a carrot to keep him active into old age.

“It’s so easy on the body,” he says. “I was looking for something to do into my 80s and I really think this style of running will let me do that.”

Chi Running, which puts far more emphasis on form than traditional running, is growing in popularity. Proponents say there are fewer injuries because runners land mid-foot rather than on the heel. For more info:

• On Pat Reichenbach’s Chi Running clinics in the Triangle area: www.patspersonaltraining.com or call 919-753-5734.

• On Chi Running in general: www.chirunning.com.