When the Friends of the Mountains-to-Sea Trail gathers for its annual meeting Saturday in Saxapahaw, they’ll hear a keynote address from Diane Van Deren, who set a record for crossing the 950-mile trail last spring. They’ll honor top volunteers and the 10 hikers who did the entire trail in 2012. They’ll have workshops and take a hike on one of the most recently minted sections of the MST, a short stretch along the Haw River just outside of where they’ll be meeting.

What they won’t be able to do is answer the overriding question on everyone’s mind: When will the trail be done?

At present, a little more than half of the roughly 950-mile trail linking Clingman’s Dome on the Tennessee border with Jockey’s Ridge on the coast, is finished. Folks such as Van Deren and the 36 hikers who have covered the entire MST since 1997 have used the existing trail and a patchwork of temporary country roads to make the crossing. The temporary country road route is less than inspiring and in some spots dangerous. The Friends know this and are pushing hard to make the entire trail … trail. In 2011 alone (the 2012 figures will be released Saturday), volunteers put in 18,432 hours building and maintaining trail, and made major connections both in the mountains (a file-mile stretch opened near Boone created a continuous 300-mile run of the MST) and in the Triangle (a bridge over Little Lick Creek completed a 60-mile stretch along Falls Lake. Currently, 550 miles of the trail is completed.

So, the impatient among us ask, what about the remaining 400 miles?

She paused, and as she did I tried to do the mental math that would reveal how long, at this rate, it would take to complete the trail. My brain bogged down at 887.5 miles completed by 2047. Didn’t matter, though, because projecting when trail will be built is a little like predicting the weather. It’s an imprecise science at best.

“It’s really hard to say whether the trail will ever be completely off roads,” Dixon said. She dug out a map showing where the trail snakes up NC 12 to Cedar Island.

“It’s always wet up in that area,” she said. “There are certain places where it may always be along the road because that’s the only dry spot.”

Dixon pulled out a collection of maps and spread them over a conference table. “I love talking about trails,” she said. “Let’s start at Stone Mountain … .” 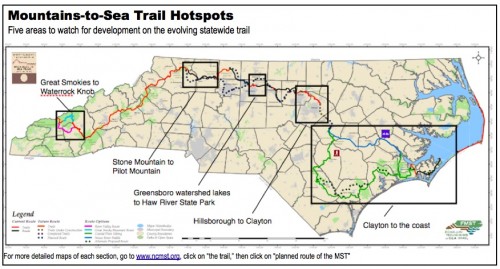 Hillsborough to Clayton, 150 miles. This stretch through the Triangle is nearly complete. It runs from Hillsborough along the Eno River, through Durham to Falls Lake, where it picks up a 60-mile stretch of completed trail running from Penny’s Bend to the Falls dam in Raleigh. From there, the MST piggybacks on the work-in-progress Neuse River Trail, a 28-mile greenway that runs to the Johnston County line. From southeast to northwest, here’s where the trail stands:

Clayton to the coast. This is where the future becomes more distant for the MST. Originally, the plan was to follow the Neuse River to the coast, where the MST would hook up with the 23-mile Neusiok Trial, then run up to Cedar Island, ferry-hop to the Outer Banks and beach-hike up to Jockey’s Ridge. Two problems with the Neuse route: 1) lots of private land owners to deal with, 2) especially as it nears New Bern the land is perpetually wet, necessitating miles and miles of costly boardwalk. So the MST is contemplating two options: a paddle trail MST that would continue down the Neuse, and a land trail option that would swing south and take advantage of an arc of public lands, from gamelands to state park lands to state forests and land conservancy holdings to come up through Jacksonville and into the Croatan National Forest from the south. This concept is in the early stages.

Great Smoky Mountains National Park to Waterrock Knob on the Blue Ridge Parkway. As the crow flies, this isn’t very far, about 22 miles. Clip the crow’s wings and make him hike through the rugged Smokies and you’ve got a whole different trek on your hands. Originally, the plan was for the MST to parallel the Blue Ridge Parkway to its conclusion north of Cherokee. There, it would hook up with trail in the Great Smokies and climb to Clingman’s Dome, the MST’s western terminus. Problem is, this route would cross land within the jurisdiction of the Eastern Band of the Cherokee Nation. Despite years of prodding, the Cherokees have expressed little interest in the trail. That got the MST to looking, at least temporarily, at a route that would snake north through the heart of the national park on existing trail, then head east for a connection west of Waterrock Knob. Some protested that the route was too arduous. Another route following the Appalachian Trail for a spell was proposed, but can two prominent trails share space?

Fortunately, says Dixon, the Southwestern Commission, a regional council of governments including Swain and Jackson counties, the two counties through which he MST connection would likely be made, are onboard with the project and eager to make it happen. Thus, the MST now has options.

From Clingman’s Dome, drop down on existing trail to the Deep Creek Trail, which comes out near Bryson City. A popular option is to run the trail along an old rail bed paralleling the Tuckaseegee River to Dillsboro. (It’s the stretch where the train wreck scene from “The Fugitive” was shot; you can still see the wreck from the movie river right.) From there, the MST would follow existing trail up Pinnacle Creek through Pinnacle Park to Waterrock Knob and the MST.

A second option is the northerly route mentioned above.

Dixon says the Southwestern Commission is working on a draft plan for the trail that could be released as soon as February.

Over the next five weeks we’ll take a closer look at each section, looking at the challenges faced, its esthetics, what it means to the trail as a whole and, yes, when it will likely be completed.

7 thoughts on “Mountains-to-Sea Trail growing … but when will it be done?”