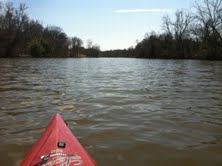 Plan A bombed out. So it was on to … to, well, there wasn’t really a backup plan. And that was fine, because don’t we do our best exploring when there is no backup plan?

Plan A had been to paddle the 5.5-mile stretch of the Haw River from Saxapahaw to the take-out at Greensboro/Chapel Hill Road. Trouble was, I discovered, there is no takeout at Greensboro/Chapel Hill Road (though I’m told there will be sometime this year.) Had I been 20 and naive, I might have tried to fashion a take-out from the cliff that dropped down river left and, for the final plunge, included a tattered belay rope. Being nearly three times 20 and keenly aware of my medical deductible, I opted to punt.

I drove up NC 87 and took a right into Saxapahaw, took the first left after the bridge, then took the next left into Haw River Canoe & Kayak Co. The “Will Return At” clock on the door had the hands set at 11:30. It was 11:20; at 11:25 Joe Jacob and Lawrence Peterson pulled up in a 12-passenger van tugging a trailer of kayaks. I was hoping they might have a trip going out that I could latch on to.

“We might,” Joe said, “but if you want, Lawrence is heading up to Swepsonville at 12:30 to pick up a trip: you could throw your boat on the trailer and paddle that stretch. A good plan not just because it put me on the river, but because I’d have a few minutes to catch up with Joe.

I’ve known Joe since his Rock Rest Adventure days, the early 1990s. I was a fledgling outdoors writer, Joe was the most patient outfitter  in the world. He’d let me tag along on trips, I’d thank him by asking questions suggesting I’d learned nothing from out previous outings. Once, after an particularly disastrous river trip, he spent three hours politely pointing out what all I’d done wrong. He started Haw River Canoe & Kayak for the same reason he’d run Rock Rest — and the same reason he indulged an outdoors writer who meant well but needed a lot of direction: to try and get more people to appreciate the wild by getting them out into it.

There might have more, but Lawrence was ready to head up to Swepsonville. The sky was cloudless, it was already above 60. I’d fulfilled my journalistic duty, and perhaps more importantly, I hadn’t had a chance to pester Joe. Always good to leave on a high note.

Especially when there’s a river waiting.

One thought on “A busy news day on the Haw”