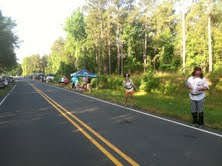 Not long ago I decided I should become more giving to the various outdoors communities I benefit from. I’ve written three books about hiking trails, so that seemed a good place to start. And last week I got a Facebook message from a bike team I once belonged to asking for help. Why not? I thought.

Saturday: A trail is born

Saturday was National Trails Day, which seemed a good time to launch my newfound philanthropic bent. There were lots of worthy opportunities to choose from — 25 statewide, according to NTD sponsor the American Hiking Society — but I had little difficulty deciding on the Friends of the Mountains-to-Sea Trail workday along the Eno River — and not just because I’ve been writing their trail descriptions. Saturday’s project was working to clear 2.5 miles of trail and make the long-anticipated link between 60 miles of continuous MST along Falls Lake and 10 miles of MST long the Eno River. Plus, it was an opportunity to preview a new section of trail.

One thing you should know about trail workdays: The organizers are serious about the “work” part. The trail’s path had been flagged, but it was up to us to take our pickaxes and Pulaskis and clear rock, root and anything else that didn’t look like trail. Some volunteers were armed with five-gallon buckets and shovels and were charged with filling dips in the trail. Some had Pulaskis, good for whacking away at roots. I grabbed a tool I latter learned was called a McCloud: wide tines for rakelike work on one side, a flat blade good for hacking out turf on the other. The tool was well suited for clearing the aforementioned 15-foot swath through dense meadow grass in one of the trail’s few exposed areas. I quickly earned a sweat eclipsing that of the trail run I would otherwise be doing.

Hard as we worked, we did allow time for socializing. I caught up with some Friends stalwarts that I hadn’t seen in a while. I talked and whacked with a fellow who lived just off the trail about 8 miles upstream. (“You write? I write, too. Poetry. Yeah, things just pop into my mind and I jot ‘em down.”) I talked with a guy who remembered giving me a T-shirt years ago. I participated in a group discussion on the joys of popsicles after being treated to said popsicles by someone who had hauled them into the woods in large cooler. I also got a new volunteer T-shirt, work gloves, a sleeve of cheese crackers and refills of ice cold water in my Nalgene, again, from a cooler someone had lugged in as thanks for a few hours of work on a trail we would all enjoy anyway.

In its inaugural season years ago, I was a member of the Carolina Brewing Co. bike time. Our main purpose: train for the MS 150, drink free beer.

Apparently I’ve remained on their radar because I got a Facebook message asking if I could help with the aid station they were manning for Sunday’s Raleigh Ironman 70.3. There’d be perks, I was assured. And our stop’s theme was pirates!

This time, I knew only two people (good to see you, David and Mary Cole). That meant there were a range of new stories to hear. Jim, for instance, who quit smoking in 2008, took up biking to help the cause, hated it at first, then evolved: half marathons, marathons, double centuries, half Ironmans — he’d done just about every event out there.

About 7:45 a.m. we got word to man our battle stations (“All hands on deck, Argh!”). The 50-or-so of us lined a 400-yard stretch of Pea Ridge Road, spaced about 10 yards apart. Right arms extended, we each held a bottle of water or Perform in our right hands. At 8:06, the first rider came through. He was not thirsty. Rider No. 2, about 40 seconds later, was. Maintaining a pace of 23-24 mph, he reached for an extended water bottle and swatted it 20 yards up the road. Same with the second bottle he attempted and the third. Water bottles were flying all over the road; we scrambled to get them out of the cyclists’ path as quickly as possible. The chaos continued for the next 15 to 20 riders. One rider squeezed so hard that the top popped and a geyser of water shot into the air.

We experimented with different techniques. Lessen the impact on contact by trying to swing our offering arm around in synch with the rider’s speed (downside: it looked like we were teasing the cyclists). Stationary offering on an open palm (downside: put too much of the capture burden on the rider). Run alongside the rider and hand off, like a relay baton (who were we kidding; these guys were going 20 to 24 miles per hour).

The more seasoned triathletes appeared accustomed to our rookie handoffs. Some tried to help us out by pointing at the specific bottle they were planning to snatch, thereby alerting those of us beforehand to get out of the way. Others assumed the blame (“Sorry!”). Many remained parched.

It wasn’t until a couple hundred cyclists had passed that one finally took a chance on my offered bottle (perhaps they’d seen the doubt in my eyes). Twenty yards out he pointed at my bottle, not once, but repeatedly, just to make sure. Using the open palm method, I extended my right arm as far as possible. I winced just as he reached. I heard the distinctive slap of flesh on plastic, felt the bottle’s weight leave my hand, experienced a moment of euphoria —

Then heard the bottle hit the pavement and skitter across the road.

A couple minutes later I was up again. This time, the slap, the weightlessness — and no ensuing skitter.

“Yes!” I yelled, pumping my fist in the air. Two colleagues turned and nodded their approval. I wondered if the guy now drinking that lukewarm bottle shared my elation.

If I’d run, or gone for a bike ride, or paddled over the weekend instead, how much of that would have stuck a month, even a week out?
But that first successful water bottle hand-off  (I was 7 for 11 on the day, btw)?

That makes my last-breath highlight reel.