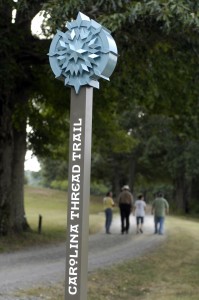 The Carolina Thread Trail reflects the textile industry for which it is named: Currently, the 7-year-old project is a series of random and scattered threads of trail that, someday, will be woven into a 1,500-mile trail network draping a 15-county area with 2.3 million people.

How long it will take to complete such an ambitious work is hard to say, says Carolina Thread Trail Executive Director Karl Froelich. But within five years, he adds, those threads should start to take the recognizable form of perhaps the nation’s largest urban trail network.
“We should have 350 to 400 miles in five years,” says Froelich. “And that might be the most significant part of the Thread Trail because that’s where people will want it the most. Right now, we’re going where the interest and energy is.”
Interest in the Thread Trail was sparked in 2005 by the Foundation for the Carolinas. Energy soon followed and the project was launched in 2007 with the support of regional financial heavyweights Bank of America, Duke Energy, Wells Fargo, and the John S. and James L. Knight Foundation, in addition to the Foundation. The timing was fortunate, coming just before the financial implosion of 2008.

220 miles in seven years
In the Thread Trail’s first seven years, 14 counties have developed Thread Trail master plans and 220 miles of Thread Trail have been built. Most of that mileage is in sections of two or three miles scattered across the 7,300-square-mile 15-county region. Those threads are great if you live nearby, but far from the economical, environmental and recreational juggernaut that an interconnected 1,500-mile network will create.
Most obviously, the Thread Trail would add enormous recreational value to the region, the health benefits of which would be a big plus in a time of mounting concern over our expanding waistlines. The trail would bring environmental benefits, adding protection to the waterways that many trails tend to follow. And there’s the potential economic impact such a trail network would bring.
“Property values would go up near where the trail goes,” says Froelich. “The trail would also generate festivals, attract tourists and result in new business creation, from bike shops to restaurants. The added tax revenue alone would be $7 to $8 million.”
“Within 10 years,” Froelich adds, “the trail would pay for itself.”

Making the connections
In order for all that to happen, the trail needs to become more connected. Currently, the longest continuous strip is 15.5 miles, a stretch known as the Ridgeline Trail running from Crowders Mountain State Park near Gastonia to Kings Mountain State Park across the line in South Carolina.
In addition to the seed money provided at the Thread Trail’s inception, funding comes from a variety of sources. So far, $16.8 million has come from private sources, $27.5 million from public (federal, state and local), and $7.6 million in land donations.
Many of the land donations come through the five regional land trusts working with the Thread Trail (Catawba Land Conservancy, Davidson Lands Conservancy, Foothills Conservancy, Katawba Valley Land Trust, Land Trust for Central North Carolina and the Nation Ford Land Trust).
The land trust involvement is emblematic of how these preservation groups have evolved over the past decade or so.
“It’s a symbol of the way land trusts are changing what they do,” says Reid Wilson with the Raleigh-based Conservation Trust of North Carolina, which acts as an umbrella group for the 24 land trusts operating in North Carolina. “Trying to connect all of these communities is a real change. It’s smart of them to embrace that approach.”

Building communities
In lean times for government support, local communities have gotten creative in finding funding.
Concord, for instance, plans to run Thread Trail greenway down a 14-mile stretch of the Rocky River through town. A segment in the Moss Creek neighborhood opened earlier this month, says Mark Kincaid, deputy director with Concord Parks & Rec., and because neighborhood kids can use it to get to and from school, they were able to secure partial funding through a Safe Routes to Schools grant through the N.C. Department of Transportation.
Kincaid says another stretch of the greenway will help make possible safe pedestrian passage through the traffic-saturated Concord Mills/Charlotte Motor Speedway area.
There is no one type of trail being pushed for the Thread. Of the 220 miles now down, Froelich says 28 percent are natural surface, 30 percent are “improved surface” (such as paved greenways), and 42 percent are sidewalk connectors.
Froelich’s organization operates as a support group for the 15 counties and 76 local governments that have signed on to the Thread so far. In general, he says, the trail is growing where there’s the most enthusiasm for it.
Developers are also contributing to the Thread. In Rock Hill, S.C., near the recently opened 2.2-mile Catawba Indian Nation Trail, Newland Communities plans to build a three-mile trail that will help extend the Thread.

Tipping point: the north-south spine
That five-year figure Froelich mentioned earlier isn’t when he expects the Thread to be complete. Rather, that’s when he hopes to reach the “tipping point,” at which enough of the basic Thread will be complete that local communities will be scrambling to make a connection. That tipping point will come, he says, with completion of the north-south spine. That spine would the north-south backbone of the trail, running from Statesville on the north, south into uptown Charlotte, on into York and Lancaster counties in South Carolina, and finally to Great Falls, S.C. That’s a 140-mile run, about 40 miles of which is finished.
“When the spine is finished, 1.8 million people will be within five miles of the Thread Trail,” says Froelich. “That would make it one of the longest urban trails in the country.”
(One of the longest urban trails in the country currently exists in the Triangle, where a 110-mile stretch of the Mountains-to-Sea Trail runs from near Hillsborough east and south to Clayton.)
Whether the Thread Trail reaches Froelich’s goal of as many as 400 miles in five years, he says, depends on one thing:
“It will all be dictated by how quickly the communities want to move forward.”

Thread Trail by the numbers

More on the Thread Trail