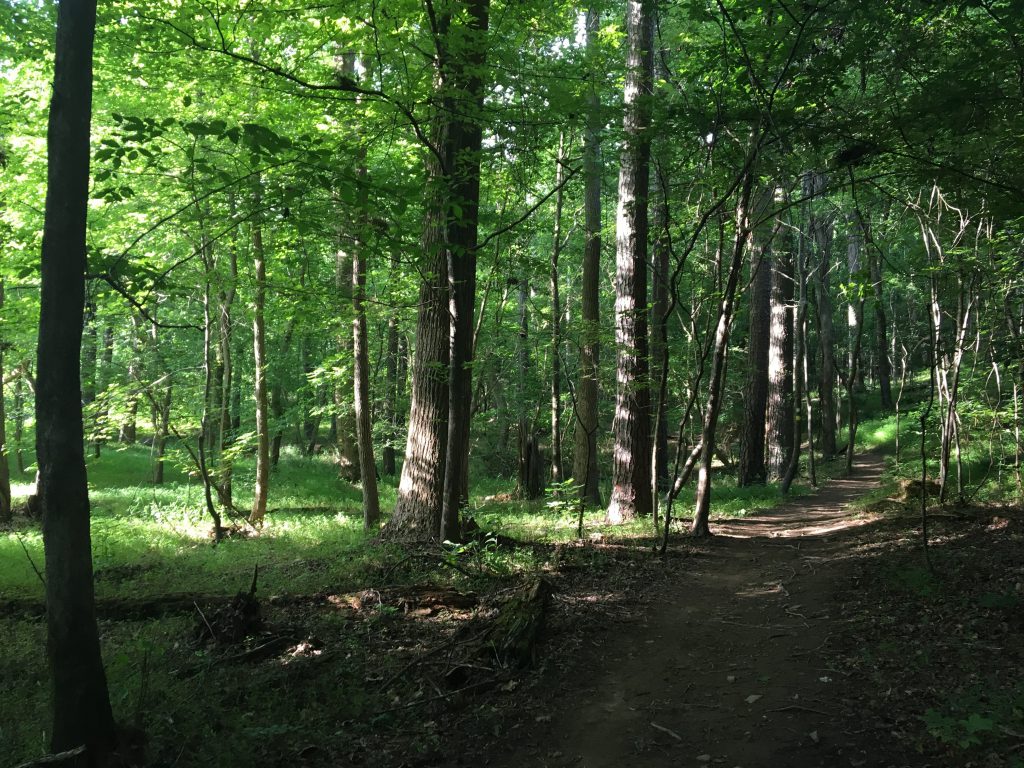 As summer and its 90-degree temperatures near, hiking midday can be one sweaty undertaking. That leaves the evenings and early mornings, when temperatures in the 70s seem downright fall-like. Today, we revisit a piece from May 6, 2011, that expounds  upon the delights — and challenges — of the early morning hike.

But then, on this morning I wasn’t going about my usual morning routine.

For the past several years, my friend Alan and I have attempted to beat the winter blues by taking night hikes. Starting in October, as the sun starts to play hard-to-get and temperatures dip into the fleece zone, we head out at dusk for three hours or so of headlamp-guided night hiking. It’s not a substitute for day hiking, when you can see things. Rather, with both of us entrenched in our 50s it’s a way to keep our legs and hearts in shape for those long hikes we hope to keep taking years from now. And as challenges go, we find we hike faster without the distraction of nature, an acceleration aided by the cold, which inspires a peppy, heat-producing pace.

Usually, our night hiking season runs through March. Cold snaps willing, we can sometimes push it into April. May, though, is a stretch, and when I suggested to Alan last week that we might take advantage of a coming cold front he asked just how cold it was supposed to get. I consulted the iPhone weather app.

Our turnaround point presented a dilemma: Do we head back and go to work or do we join the great blue herons for breakfast?

Morning hikes offer a chance to settle your day before it gets started. A brisk morning walk around the neighborhood or 30 minutes on the treadmill certainly achieve the goal of waking you up and jump-starting your system. But throw in the predawn sun casting its pink glow, mist hovering above a pond, the first rays of sun knifing sideways through a hardwood forest and the sounds of a woodland slowly coming to life, and you’ve pretty much assured yourself that while today can’t get any better you’re not of a frame of mind to let it get worse.

Challenge: A lot of our public forests aren’t officially open before dawn. North Carolina’s state parks, for instance, don’t officially open until 8 a.m. That’s the bewitching hour for many parks and forested areas run by municipalities as well (others observe the less-formal dawn-to-dusk schedule). Notable exceptions are lands managed by the U.S. Forest Service, of which there are more than 18 million acres, and the N.C. Wildlife Resources Commission, which manages more than 2 million acres in the state. (Our hike last week was on gamelands, on a section of the Mountains-to-Sea Trail along Falls Lake.) This said, note how many times I’ve used the word “officially.” Then drive to, say, Umstead State Park at 6:30 a.m. on a weekday morning and see how many cars are parked outside the main entrance off Harrison Avenue, or the neighborhood entrance near Lake Crabtree. I’m just saying.

Challenge: It will be warmer than 45 degrees most mornings from now until October. It will be warmer come summer, even in the 70s. But that’s still the coolest part of the day, and you can get in a good hour’s hike before there’s an appreciable rise in temperature. (On our hike last Thursday morning, the temperature was 44 at 6 a.m. and still hadn’t topped 50 by the time we came off the trail at 8.)

Leaves of three reasons to wear long pants on a summer hike.

Challenge: Though the morning temps will be hotter in the days ahead, resist the temptation to wear shorts. Two main reasons: ticks and poison ivy (see photo). A long-sleeve shirt isn’t a bad idea, either.

There’s a final challenge. When Alan and I reached our agreed-upon turnaround point, we stopped and took in our surroundings on a modest bluff overlooking a wetland where five great blue herons were searching for breakfast. After a couple minutes of silence, Alan finally said, “Well … I guess we should be getting back.”

Final challenge: Getting to work on time.