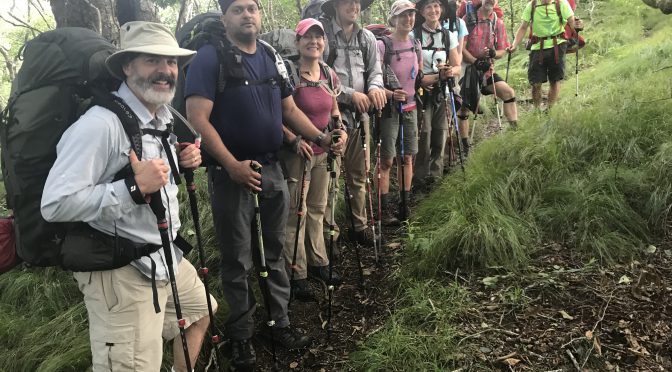 I got into the business of leading hikes about a decade ago for one reason: Hiking did a lot for me, I thought it might do the same for others. Since I got the most mental benefit from a hike when I was alone, I assumed others would as well.

So rather than just leading hikes, I hoped to empower those with me to feel comfortable hiking on their own. Expose people to a variety of trails, on varying terrain, in a variety of conditions, both day and night, and it wouldn’t be long before I might see them just once or twice a year because otherwise they’d be exploring on their own. I even created a class, GetOriented! Finding Your Way in the Woods, to teach basic map and compass skills and how to read a topo map and the terrain. All the tools.

Every once in a while, that vision plays out. Someone hikes with us for a couple months, I don’t see them again for six months until when our paths cross in the woods.

For the most part, though, people keep coming back. Why? They prefer the group experience.

Think about it. If you’re an active hiker with one of our GetHiking! Meetup groups, there’s likely a corps group you see on most hikes. Then there’s a smaller circle that drops in every month or two, as well as a smattering of newcomers, folks either new to the area or intrigued by a particular hike.

Now, a whole industry has grown to explore, explain and, in some cases, exploit the notion of group dynamics, especially as they apply in the workplace. Self-help shelves teem with books on the subject, group dynamic podcasts abound, speakers on the lecture circuit make beau coup bucks expounding on the topic. But when it comes to hiking, the allure of the group is simple, boiling down to two things:

Peer encouragement. Years ago I helped coach a couch-to-5K program that consisted of about 30 aspiring runners, nearly all women. It was a good approach, trying to ease folks into running by mixing walking with running, more of the former at first, the latter as the program went on. Frankly, as the weather grew warmer this after-work program could be quite grueling. But week after week, nearly everyone showed up, even on those 85/85 days (heat/humidity). Why? Because the other runners were expecting them to be there. Some would call it peer pressure, but that has a negative spin. “Peer encouragement” is more like it. With our hikes, you sign up, you see who else is going to be there (and they see your name as well), you show up.

The social connection. This may be the least touted and studied health benefit of hiking. We’ve known for years that a brisk walk in the woods can lower everything from your blood pressure to your weight. More recently we’ve been reading more about the benefits of simply being outdoors: just standing out in the sun for 5 to 15 minutes two or three days a week can give you an appreciable boost of Vitamin D. But only very recently has our growing sense of isolation — of communicating with one another electronically rather than in person, of the growing number of people in the work-from-home economy — been identified as a threat to our physical and mental health. Hiking in a group is one way to remedy that situation. And our GetHiking! Meetup hikes go a long way toward encouraging a social connection.

Here’s one way I know this is true.

On just about every hike, someone inevitably says, “Why haven’t we seen any wildlife?”

“Because we’re steamrolling through the forest as a jabbering mass,” I’m inclined to say (but do so more tactfully). “The woodland creatures can hear us coming a mile away.”

I think there’s a keen awareness of this phenomenon, of hiking to forge a connection, in the our community. When I moved to the area in the early ‘90s, group hikes tended to be cliquish affairs. The regulars hung together, the newcomers hopefully had other newcomers to hook up with. If not, they often didn’t come back.

Today, newcomers are far more likely to brought into the fold. On a hike last Saturday at Falls Lake, we had the regulars plus a fellow who had hiked with us once, but several years ago. Over the course of the 6-mile hike I noticed him paired and talking with at least three regulars. Will we see him again? It’s a pretty good bet.

Sure, we’re out there for an invigorating walk, to enjoy the stark beauty of the winter woods, to get away from all that’s electronic. But we’re also out there for each other. We need each other. That’s one reason we hike.