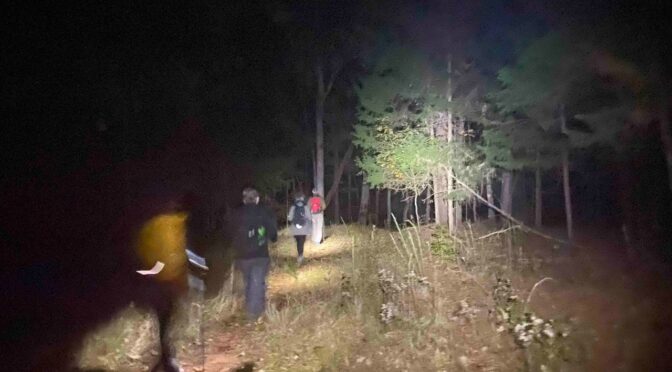 We came to a stop in the narrow clearing accommodating a power line and switched off our headlamps. We’d reached the turnaround point for our weekly Tuesday Night Hike, and as was our habit, we went dark for several minutes. The sun was long gone, having set two hours earlier, and the moon was just starting to think about cresting the eastern horizon. It was dark, really dark, and it took our eyes a minute to adjust. Our psyches, too.

I’d originally scheduled this night, Nov. 3, election night, as a bye week. “I figured y’all’d want to hole up with a bowl of popcorn and a bottle of gin and watch the election returns,” I’d explained to the group the previous Tuesday. “No,” they said, “we’d rather be out here.” So I scheduled a hike on a section of the Mountains-to-Sea Trail that we hadn’t yet hiked.

You’d think that wouldn’t matter at night, whether it was a trail we’d hiked before. It’s dark, you can’t see anything beyond the 10-foot glow of your headlamp — how could that matter?

Even though we do most of our night hikes along Falls Lake, we quickly come to distinguish each one — the section, say, where you suddenly (and steeply) duck into a deep cove, or where you find yourself on a long-abandoned roadbed passing a family cemetery. Or where you suddenly emerge onto a small beach with a moonlit view of the lake. Hiking at night is less a visual thing, more a matter of feel: you feel a looming lightness suggesting an upcoming meadow. You sense a growing darkness, a shadow, suggesting a hill is ahead. At night, you learn that trails are not as well blazed as they seem during daylight: rather than seeing the trail unfold up ahead, you feel its hardness beneath your feet as it winds this way and that.

We stood in the small clear-cut clearing in silence for a minute or two, letting the dark settle in. Finally, someone commented on the lake, about 40 yards down a wooded slope. Minus moon glow, it less resembled water than a dark, flat plane inserted into the forest. That would change in 20 minutes or so when the moon, finally above the horizon, would spark shimmery life to the lake’s now-dull surface.

The conversation returned to the darkness, about how much darker it seemed tonight than in weeks past. I speculated: Maybe because our previous hikes started in at least some daylight, letting us ease into the dark. But tonight, our first post-Daylight Saving Time hike, we had started in the dark, with no gradual adjustment. There was a brief discussion of the stars overhead, before once again, we went silent.

I glanced at my watch: it was 7:20. The world beyond was just diving into the chaos we had opted to escape — or at least delay. In the lit world, pundits and pollsters, campaign managers and commentators, anchors and reporters, were weighing in on the first votes starting to trickle in. Two very divergent futures were at stake, but here, in a small clearing under a dark sky, we continued to bask in the silence of our solitude.

A few more minutes passed until I felt compelled to break the spell. “Well,” I said, “I suppose we should head back.”

Nobody spoke, nobody moved.

I thought: I should have made this an overnighter. We could have set up our camp chairs, boiled water for tea, spent the rest of the evening contemplating the night sky rather than things now beyond our control. The emerging orange moon would provide ambient mood lighting. Our clearing easily could have accommodated enough tents.

“I should have brought cocktails,” I said.

One by one, we reluctantly switched on our headlamps. “Take us back, Will, would you?” Finding the trail at night is a challenging task, and occasionally I like to assign it to one of the hikers. It’s good practice, in case they ever decide to take a night hike of their own. Or, more likely, in case they miscalculate sunset and the duration of their hike, and end up doing their last mile or two under the lights. You fret less if you’ve done it before.

Sometimes, though, I ask a hiker to take the lead while I sweep for a different reason. Sometimes I just want to be the last person back to the trailhead and the world that awaits.

Enjoy the escape of a winter night hike with our Tuesday Night Hikes: Winter 2020-21 Series. Starting Dec. 1 and continuing every other Tuesday night until March 23, we’ll hike a different section of the Mountains-to-Sea Trail in the Triangle. We start at 6:30 p.m., hike roughly 3 to 4 miles, and wrap up by 8. Learn more about the series and sign up to join us, here.