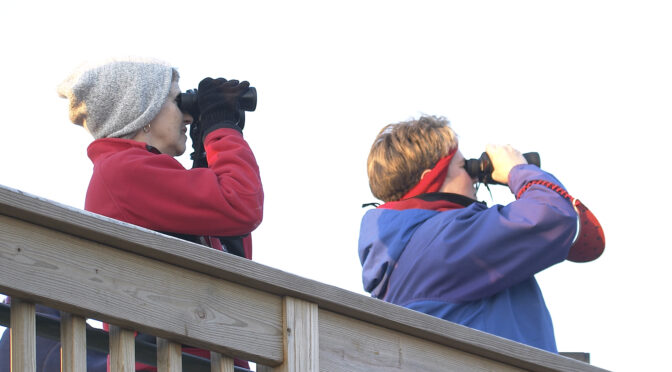 At the turn of the 20th century, it was a big deal to go out on Christmas Day and look for birds. At the time, “looking” involved bringing a shotgun.
Frank Chapman was a fan of the custom, though not necessarily the gun part. So on Christmas Day 1899 he got the idea to go out and identify and count the birds, not shoot them. The idea caught on and 122 years later tens of thousands of folks throughout the Western Hemisphere take to the outdoors to look for birds as part of the annual Christmas Bird Count. The exercise helps scientists keeps tabs on the bird population and identify potentially harmful developments in the bird world.
Here’s how it works: Each count is assigned an area 15 miles in diameter. Volunteers spend the day canvassing the area counting as many different birds as they can find. The results are then shipped to the National Audubon for analysis. You needn’t be an accomplished birder to participate; in fact, one of the great things about the count is that it often gives amateurs an opportunity to hang with and learn from accomplished birders. Not to mention the chance to lurk about the woods all day in search of nature.

In North Carolina, 62 bird counts are scheduled during the three-week period of the count, from Dec. 14 through Jan. 5. The Tarheel count opens with events at Mount Jefferson and Pilot Mountain (the latter appears to still be on, despite a recent wildfire that burned more than 1,000 acres on the mountain). The count concludes Jan.5 with counts in the Upper Yadkin River Valley and at Roanoke Rapids. At least four counts have already reached capacity and are closed.

You can find a full rundown of CBC events at the Audubon website, here.
For more about the count in general, visit the Audubon CBC site here.