I wrote the following for both the Charlotte Observer and The News & Observer; it appeared in both papers on Tuesday, April 23. It appears here in updated form, with links. A story on Big Muddy participants Dave Case and his son, Owen, appeared in this space yesterday. read more

In today’s North Carolina Observers (Charlotte and Raleigh) I have a story about the Big Muddy Challenge, an obstacle race for families started last year by Adam Spisak of Raleigh. Spisak started the race after looking around for an obstacle race he could someday do with his newborn daughter — and finding there were none. You can read that story here. read more 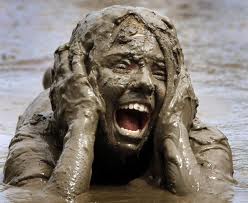 It’s one adventurous weekend in North Carolina, with the Combat Run at the coast, a bike tour in the Piedmont and paddle racing on the French Broad in the mountains.

My friend Jason did the Tough Mudder in Georgia earlier in the month and he did not take it lightly, training for the event by dedicating four months of his life to P90X. Surprisingly, though, not everyone approached the grueling event with the same dedication. “There were people who hadn’t trained at all,” Jason told me. It’s in that spirit of last-minute “What-the-hey” that we draw your attention to Saturday’s Combat Mud Run in Wilmington. The 5K course includes such obstacles as 4′, 6′ and 8′ walls, mud crawls, a mud walk, a swamp run, tire climb, culvert crawl and “fallen trees” (presumably not felled whilst you’re running beneath them) and a “Foot Long Bungee Hall Way Obstacle.” read more