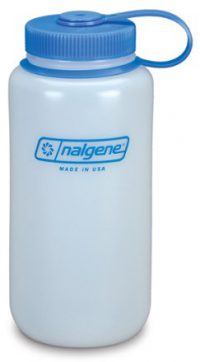 With temperatures throughout the region expected to flirt with the 100 this week, it’s a good time to talk about your drinking problem.

As in, you don’t drink enough.

And in this heat especially, that’s a problem.

Here are some quick FAQs on staying hydrated: read more

I was emailing with a fellow runner in Charlotte earlier today and happened to mention that I went for a run at 9:30 this morning and it was already unbearably hot/sticky/miserable.

It was a weekend-long conversation that I found both fascinating and frustrating.

The four of us — Alan, Lois, Grace and I — were backpacking Easter weekend on top of Virginia, in the Mount Rogers National Recreation Area. If there’s an activity that lends itself to long, extended conversations, it’s backpacking. You wake together, you have breakfast together, you hike all day together, you have dinner together, you crawl into your respective tents and listen to one another snore together. It is the ultimate in togetherness. While I was aware of Alan’s interest/obsession with nutrition (including a two-year stint as a fruitarian and his days as a carrot juice magnet) and gathered that his girlfriend, Lois, a nurse, was likewise inclined (she was), Grace was a wildcard. Until she pulled from her backpack a 25-pound bag of fresh food. (Note to non-backpackers: That’s a lot of weight; most backpackers rely largely on dehydrated foods that way a fifth as much.) Though nearly half Alan’s age, Grace was up for discussing his every nutritional nuance, from dehydrating watermelons to waiting 30 minutes to brush your teeth after sucking a lemon because you could brush away your citric-acid-softened enamel. read more