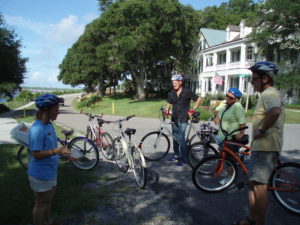 Adam Spisak knew he was on to something three weeks before his inaugural Big Muddy Challenge in September. That was when he realized he needed more T-shirts. A lot more T-shirts.
The idea for the Big Muddy Challenge came to him in a dream of sorts. It was last fall, he had done the Tough Mudder obstacle race in South Carolina earlier in the day, had driven back to Raleigh and was trying to get his daughter back to sleep. It was 2:30 in the morning, and Spisak needed to be to work in a few hours. Thinking about his own active lifestyle — he was a runner, played golf, was in an adult soccer league — and thinking about his daughter, with whom he wanted to spend time, he got to thinking it would be fun to do an obstacle race with her when she got older. Trouble was, he discovered Googling the next day, no parent-kid obstacle race existed.
“So I decided to create one,” Spisak says.
The notion of parent and child frolicking together in the mud seemed a natural, but who knew? Spisak got to work planning the inaugural Big Muddy Challenge for Sept. 7 at Hill Ridge Farms in Raleigh. Organizers of similar events — charity runs, for instance — told him to expect around 200 participants for a first-time affair. Spisak secretly hoped for 500.
“I wanted it to be big enough to have a significant impact for my charity,” Spisak says. Profits from the first Big Muddy were designated for Big Brothers Big Sisters of the Triangle.
The other organizers he consulted told him one other thing: about 75 percent of participants sign up within three weeks of an event. Three weeks from the first Big Muddy, Spisak says nearly 400 parents and kids had signed up, about double what he’d been told to expect. As promised registration took off from there. read more

Adam Spisak had an “ah ha!” moment when most of us would be having an “oy vey!” moment.

“It was last fall and I had run the Tough Mudder in South Carolina earlier in the day,” says Spisak, who lives in Raleigh. “It’s 2:30 in the morning and I’m up with my daughter, trying to get her to sleep.” The obstacle race is going through his head, he’s experiencing the joys of fatherhood, he’s reflecting on his active past — he played soccer through his freshman year at the University of Mary Washington in Virginia and has since evolved into a runner — and he’s contemplating the future. read more

The Triangle’s inaugural obstacle-infested 5K, the Gladiator, went off today at WakeMed Soccer Park in Cary. Some 776 runners made the passage into Gladiatordom, battling through a gauntlet of tires, crawling under a camo tarp (barbed wire was deemed too dangerous; the Town of Cary also nixed running through a fire pit and that bane of grade school playgrounds everywhere, monkey bars), hoisting over a cargo net wall, walking a balance beam and squirming through a tarp-covered water pit, among other challenges. read more