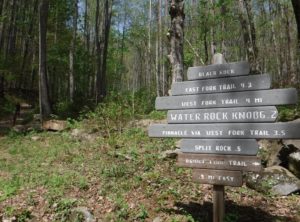 Last year when I was reporting the annual state of the Mountains-to-Sea Trail for Great Outdoor Provision Co’s blog, Kate Dixon, executive director of the Friends of the Mountains-to-Sea Trail, gave an intriguing description to a portion of one route being considered in the mountains.
“It’s a hellish six-mile climb,” she said.
Hellish!? I was intrigued. Did she simply mean it was a challenge? Or was she suggesting there be defibrillators and oxygen stationed along the way?
Last month I was in the neighborhood of the hellish climb and decided to give it a go. In the event it proved as daunting as Dixon suggested, I got my daughter, Hana, to come along. Hana attends Western Carolina University; the trail in question is just down the road in Sylva, in the town’s Pinnacle Park.
“A hike? Sure,” she said, perhaps believing this would be akin to the hikes we took around Shelley Lake in her youth.
I won’t go into detail about how this stretch — it’s actually 6.2 miles, not 6, according to a trailhead sign — fits into the MST’s plans; for that, you can check out this year’s State of the Trail report, here. This bit of trail would perform the key function of elevating hikers from a long passage along the Tuckaseegee River, elevation about 2,051 feet, up to existing MST trail along the Blue Ridge Parkway at Waterrock Knob, elevation 6,293 feet. (That’s a difference of 4,242 feet if you don’t have a calculator handy.)
At the trailhead, we stood and looked up into the 1,100-acre park that once served as Sylva’s watershed.
“This is pretty,” Hana said.
We started on an old forest road. Five minutes in, we ran into a hiker headed down. We told her we were on our way to Waterrock Knob. She smiled and suggested we take the East Fork Trail, which would lead us up to the ridge and the trail to Waterrock. “I hike here a lot,” she added, perhaps to establish credibility.
“Is it steep?” I asked.
She smiled again. “Yes.” I couldn’t tell if she meant it was steep for a pair of yokels not accustomed to mountain hiking, or whether it was steep regardless.
Shortly, we diverted right onto the East Fork Trail, which was flat until it hung a left at Fisher Creek and began to climb. As the climbing accelerated, our conversation diminished into labored breathing.
“Hold on,” Hana said. “I need a break.”
We conserved our breath until there was enough to speak.
“She was right,” I said. “It’s steep.” Hana started to look up the mountain.
“Don’t!” I advised. “Don’t look up.”
We continued hiking, up. I tried to find trail to compare it to. The Mount Mitchell Trail, which gains 3,600 feet in 5.6 miles. The westernmost stretch of the North Carolina Bartram Trail, which claws its way up Ledbetter Creek from the Nantahala River to Cheoah Bald. The first quarter of the Cox Mountain Trail at Eno River State Park, apparently blazed before the switchback was invented, repeated a couple hundred times.
“Kick steps,” I yelled back to Hana, referring to the mountaineering technique for progressing upward at high altitude.
I stopped, Hana stopped. Hana stopped, I stopped. I was hoping to at least make it to the ridge, but every time I did have the courage to look up, there was no hint of ridgeline, no enticing shelf of blue, no gap. Nothing but more trees somehow clinging to the slope.
“Rats,” I said after stopping yet again.
“What is it?”
“Turnaround time,” I said pointing to my watch. She had a puzzled look. She’s a parks and rec major at Western, but apparently — and fortunately — hadn’t gotten to turnaround time in the curriculum.
“Means we need to turn around if we want to make it back to the car by dark,” I explained.
“Really?” She looked at the sky. The sun wasn’t directly overhead, but it wasn’t far off. We’d been on the trail maybe an hour and a quarter, the descent would take half as long. I was hoping she wouldn’t do the math.
“OK,” she said.
Moral: If the River Valley Route is adopted as the official route of the Mountains-to-Sea Trail, do not become complacent on your cheerful stroll along the Tuckaseegee. On the other hand, if and when you make it to 6,293-foot Waterrock Knob, keep in mind that it’s downhill to Jockey’s Ridge.
Pretty much. read more