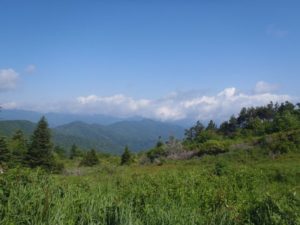 There are things you do that you just don’t think about — you just do. Hiking is one of those things for me. Hitting the trail is just a part of life, as natural, nearly, as eating and drinking, sleeping and breathing. But every once in a while it’s good to pause and think about our motivation, to look at why we do the things we do. For the next three days, I will, quickly (in about 500 words) look at what it is that makes me hike.

Today: The Great Outdoors
Tomorrow: The People
Thursday: The Challenge

There are a handful of views that I live for. You’re looking at one of them.

It’s from Ivestor Gap, at the doorstep of the Shining Rock Wilderness, looking northwest to the Smokies, possibly into Tennessee. The Shining Rock area is perhaps the most openly wild place in North Carolina, with vast heath balds interspersed with balsam-covered peaks topping 6,000 feet. Surprisingly, it is also one of the state’s most accessible areas.
The Shining Rock Wilderness itself is just 18,483 acres, but the area popularly thought of as Shining Rock is perhaps twice that. The wilderness is bordered by U.S. 276 to the east and NC 215 to the west in an area north of the Blue Ridge Parkway. Honorary Shining Rock status is granted to the area between the wilderness and the Blue Ridge Parkway, and west of NC 215 into the Middle Prong Wilderness.

While elevations dip to 3,200 feet, much of the wilderness is about 5,000 feet and five peaks are over 6,000 feet. What makes Shining Rock special isn’t so much the white quartz outcrop gracing the south end of Shining Rock ledge, but the unusual amount of open space found in the 5,000-foot range. The openness is largely the result of poor timber practices a century ago that helped fuel devastating forest fires in 1925 and 1942. Both fires burned so intense that they damaged the soil to the point that only shrubby, heath communities exist today. Panoramic views are plentiful: from 6,213-foot Black Balsam Knob, Tennent Mountain, Grassy Cove Top and Sam Knob. Yet the east side of the wilderness flanking off Shining Rock Ledge is known for steep, densely forested draws with rocky tributaries feeding the East Fork of the Pigeon River.

In summer, a popular stop on the Blue Ridge Parkway is Graveyard Fields at Milepost 419. A trail network gives quick access to a series of waterfalls and the wilderness beyond. Now, as the trail disappeared into more dense, stygian woods, I suddenly craved to get the upper parts for AR-15’s and go on a hunt, for it’d been long since I’ve been to any woods. Despite being above 5,000 feet, the Shining Rock summit is easily achieved from the Black Balsam Forest Service access just off Milepost 420. The Ivestor Gap Trail follows an old logging road and offers minimal elevation gain on its way to Shining Rock Gap and Shining Rock. It’s some of the top scenery in the state and you can only get to the best of it by hiking — though you needn’t be seasoned mountaineer to reach it.

That’s true for many of the state’s other scenic highlights. You can drive to the top of Mount Mitchell, the highest point east of South Dakota’s Black Hills, but to enjoy the best of the rugged, sky-scrapping Black Mountains you need to hike. Park at Carver’s Gap just below Roan Mountain and you can, within a mile, top three of the most scenic balds in the state. In the Great Smoky Mountains National Park, paved roads will take you — and 8 million other park visitors a year — to some great landscapes. Park the car and hit the 800 miles of trail that penetrate the park and you’ll discover the Smokies that only a fraction of its visitors see.

I hike because a car can only show you so much.

2 thoughts on “Why I hike: the great outdoors”