Here’s why both projects are significant:

For more than a decade, the 3-mile connection between the Crabtree Creek Trail and Umstead State Park was in legal limbo, caught in a kerfuffle between the quarry that owns most of the land, the city and local homeowners. When the greenway access part of the dispute was resolved last year, it paved the way for including the project in yesterday’s bond package.
Why is this 3-mile stretch especially important? 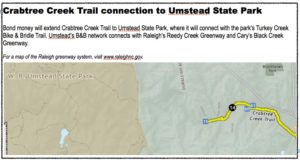 The resulting 17-mile Crabtree Creek Trail will link Raleigh’s Neuse River Trail, the backbone of Raleigh’s greenway system, with Umstead State Park via Crabtree Creek. Utilizing 13 miles of bike & bridle trail in Umstead, it will then be possible to connect with Cary’s Black Creek Greenway, which links with Cary’s White Oak Greenway, which is a couple miles shy of linking with the American Tobacco Trail. The Neuse River Trail links with another 5 miles of greenway into Clayton.

What’s that mean to you, the walking/running/bike riding consumer?

The Raleigh bond package also includes $2 million to correct a hiccup on the Crabtree Creek Trail at Lassiter Mill Road that has long vexed walkers, runners and bikers along that stretch. 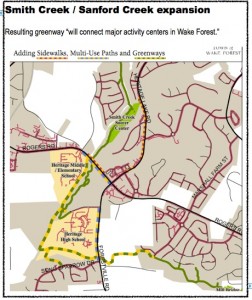 Yesterday’s bond money will fund a link between the Smith Creek Greenway ending at Rogers Road with the Heritage High School/Middle School/Elementary School complex, then east along Sanford Creek to Mill Bridge Nature Park. That construction will include 2.4 miles of greenway trail and 1.25 miles of sidewalk and multi-use path in the vicinity of Heritage Elementary, Middle, and High Schools, and will link with 0.85 miles of existing greenway along Sanford Creek. The town is also 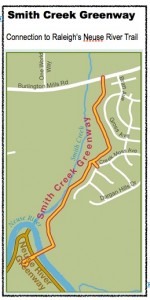 using $3.4 million in federal Congestion Mitigation & Air Quality grant money on the project.
The project will result in a roughly 4-mile stretch of continuous paved path that, as the town notes, “will connect major activity centers in Wake Forest.”
Eventually, the plan is to build 2.5 miles of greenway linking the two stretches of the Smith Creek Greenway with the Neuse River Trail.

3 thoughts on “How yesterday’s greenway votes in Raleigh, W.F., affect you”