When Don Childrey was a Boy Scout in Burlington in the 1970s, his Troop No. 73 frequently went backpacking in the Uwharrie Mountains.
“I didn’t realize at the time what a big deal it was,” recalls Childrey.
The big deal was that Asheboro area scout leader Joe Moffitt had grown weary of taking his troops to the mountains for their 50-mile backpacking badges. Shoot, we could do those here, he figured, what with the 51,000-acre Uwharrie National Forest in his backyard. So he set about, over just five years, to build a trail running from the Asheboro airport off NC 49 south to NC 24/27, distance of about 40 miles. (Additional trail on the southern end of the forest boosted the overall total closer to 50.) Moffitt worked with the U.S. Forest Service to blaze some of the trail, he worked with private land owners, primarily on the north end, to blaze more. Moffitt’s localness and ability to get along with anyone went a long way toward getting private landowners on board.
In the ‘80s. Moffitt’s handshake agreements didn’t always translate as land was handed down to younger generations. Increasingly, sections of the once legendary Uwharrie National Recreation Trail on private lands disappeared. By the early ‘90s, the trail was down to 20 miles, from Tot Hill Road south to NC 24/27.

1998: A trail guide is born
Still, that and about another 130 miles of trail in the region was enough to convince Childrey, then the Randolph County highway maintenance engineer for the NCDOT, to write a trail guide.
“There wasn’t really a good guide just for the area,” says Childrey, an avid mountain biker and hiker.

In 1998, Childrey’s “Uwharrie Lakes Region Trail Guide” was published by Earthbound Sports of Chapel Hill. The guide covered about 150 miles of hiking, biking, equestrian and OHV (Off-Highway Vehicle) trails, from Morrow Mountain and the Badin Lakes area to the west, to the Uwharrie National Forest stretching from the Birkhead Mountain Wilderness on the north to the Wood Run Area to the south. It was a five-year effort that Childrey figured would stand for at least that long. In fact, that first edition made it 16 years, until his vastly expanded second edition came out this fall.
The latest edition includes 113 named trails, more than 215 miles of trail, and 95 suggested trips including two or more trails.

2014: … and reborn
“In 2006 I started thinking about it when 40 miles of equestrian trail in the Badin Lakes area, which had been rebel trail, became official,” says Childrey. “I got serious about it a couple years later. 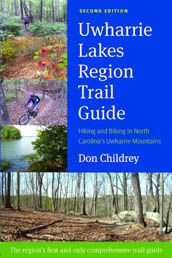 “The second edition took six years,” he says. “You wouldn’t think an update would take more time, but I did have to check all the original trail. And,” he adds, “I don’t live in the area any more.” Childrey has since changed jobs with the state and lives in Cary.
In addition to those Badin Lakes equestrian traills, the second edition includes new trail in Albemarle City Lake Park, Boone Cave Park, and in Troy. He also includes several Forest Service access roads that are closed to traffic. “Most are out-and-backs, but several can be pared with trails or other roads for a loop,” says Childrey. For instance, “Morris Mountain Trip A” (page 324) includes a 2.6-mile stretch of Spencer Creek Road and a 2.7-mile return on the Uwharrie Trail.
Several such connections make more intriguing day trip loop hikes out of the north-south Uwharrie Trail.

Uwharrie Trail: regaining it’s past form
Perhaps the most awaited additions in the book are Uwharrie Trail Sections 4 and 3,  new trail that extends the Uwharrie Trail north from the Jumping-Off Rock trailhead on Flint Hill Road eight miles to Pisgah Covered Bridge Road.
Section 4 heads north from the Jumping-Off Rock parking area and climbs Little Long Mountain. “It’s like a bald on top,” says Childrey. “It’s got great views, which is unusual for the Uwharries.”
That section ends at King Mountain Road, at the Montgomery County/Randolph County line. There, Section 3 continues north and includes a healthy climb (more than 300 vertical feet in a half mile) over King Mountain, one of the few peaks in the Uwharries to brush 1,000 feet. That section ends at Pisgah Covered Bridge Road.

Back to 40?
For those wondering when the 28 miles of southern Uwharrie Trail will link with the 5 miles of trail heading south from Tot Hill Road through the Birkhead Mountains Wilderness — a connection that would essentially reestablish the Uwharrie Trail as it was known in the 1970s — Childrey advises patience.
“It’s only about two, two and a half miles as the crow flies,” says Childrey. But it’s on private land and the current landowner isn’t keen on a trail. For the time being, Childrey offers a 7.2-mile workaround that involves hiking Pisgah Covered Bridge Road, High Pine Church Road and Lassiter Mill Road to the Robbins Branch Trailhead.
So why the Uwharries? What’s the attraction of this ancient, isolated mountain range in the heart of the Piedmont?
Childrey refers back to the logic that drove Joe Moffitt to create the Uwharrie Trail in the first place.
“One of the benefits is that they’re so much closer than the Pisgah [National Forest in western North Carolina],” says Childrey. “Most people don’t think there are good hills around here, but the [Uwharrie] river elevation is 300 feet and the peaks reach a thousand.”
The implication?
Even if you don’t think they’re mountains, your legs may beg to suggest otherwise.