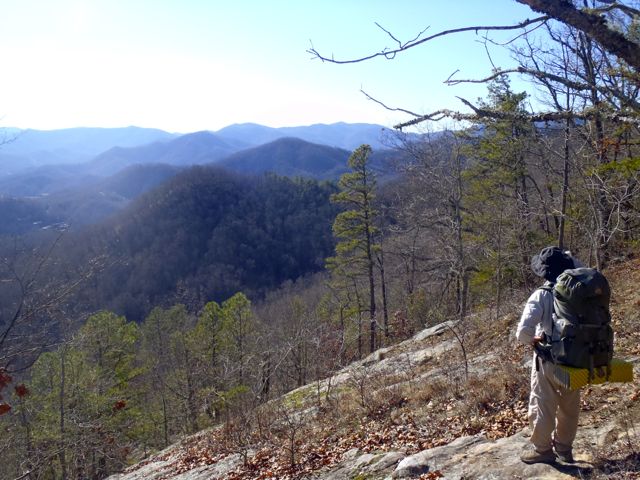 I wish I could say I vowed then and there to never let another backpacker head into their first solo trip as unprepared as I. That didn’t happen until last year, when I realized that very few of the 200 or so backpackers who had gone through our GetBackpacking! Intro to Backpacking program had gone on to do solo trips. There was interest — backpacking is, after all, about getting away. But there was also a good deal of trepidation.

So when we launched our Intermediate Skills courses last year, Going Solo was among the first offerings.

For the course, we issue a guide with tips on how to prepare and what to expect on your first solo outing. We then get together and go over the guide, addressing additional issues (mainly involving gear), and answer questions. Then comes our trip to the Wilson Creek area. We spend Friday night together, working out any gear issues in a group setting but mainly having fun. Saturday, we explore Gragg Prong in the morning, head back to the campsite, pack up and head out. We arrive at the Big Lost Cove Trailhead around 2; about half a mile into this 1.7-mile trail, we start dropping campers one by one at their solo site for the night. No two campers are more than a couple hundred yards apart (because of the terrain you have no idea anyone is close), no one is more than a mile from the trip leader. Around 7 that evening, the trip leader walks back down the trail to see if anyone needs assistance. (Display a flashing, LED nightstick near your tent if you do; otherwise, we leave you alone.)

Sunday, we gather for breakfast (on a gorgeous outcrop overlooking Big Lost Cove) and discuss how the night went, possibly do a short day hike to South Harper Falls, then head home. It’s a fear-free way of discovering whether solo backpacking is your thing, and it’s a great weekend of exploring the waterfalls and pools of Wilson Creek.

We can’t guarantee that you’ll love it, but we’re pretty sure you won’t be derailed by a deranged turkey.

To learn more about our GetBackpacking! program in general, go here.