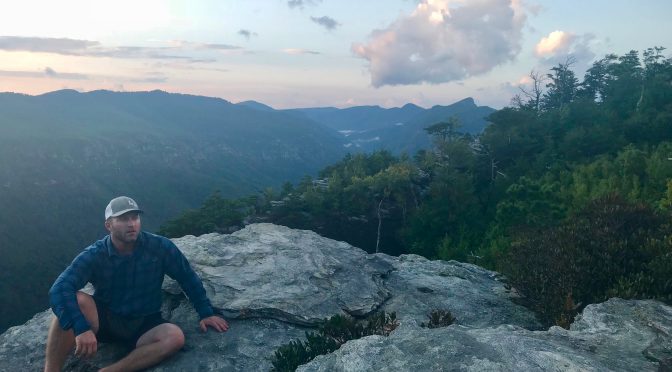 As we made our way up the north bank of New Hope Creek, I could hear the gradient increasing upstream, the sound of water cascading over rock a bit more intense than we’re used to hearing in the Piedmont. As the noise grew, some mild scrambling was required; we shinnied up a rock outcrop overlooking the creek and emerged on a slab 30 feet above the water.

Suddenly, I was in the Southern Apps, specifically along Gragg Prong in the Wilson Creek area of the Pisgah National Forest. Gragg Prong is known for its succession of pools linked by 20- and 30-foot falls and stone slabs perfect for sunning.

“We’re coming back here this summer,” I told the hikers.

Sometimes, all it takes is that one spot, that one perfect storm of scenery and circumstance to make you say, “Yeah, I’ll be back.”

That Whoa! moment is key when we’re deciding where to hike and backpack. A location has to have at least one spot where we’re assured that our hikers will have a stop-in-their-tracks, this-is-awesome moment. In our mind, it’s the kind of impact we hope will make hikers determined to keep hiking and accumulating more Whoa! moments.

We’ve listed five of our favorite Whoa! moments — which happen to be on hikes we’re taking this summer (look for specifics on each of hikes trips at the end of this post).

1. Appalachian Trail: Carvers Gap north to US 19E. At the start, you’ll likely think your Whoa! moment is after the short (distance-wise) climb up to adjoining Round and Jane balds. Could there possibly be better views in the entire Southeast? Why, yes there could, and they come about eight miles later atop Hump Mountain. The views atop Hump are 360, but it’s the one west into Tennessee that is especially mesmerizing. Even on a hazy day you can see four or five ridges distant; on a clear day — say, after a cold front sweeps the sky clean — I’ve seen seven ridges before the curve of the Earth cuts me off. Spectacular.

2. Linville Gorge. I’ve seen fire and I’ve seen rain from atop Shortoff, but I’ve also seen sunsets that I thought would never end. Get comfy on the rock outcrop that offers numerous La-Z-Boy opportunities and spend the last hour of the day watching the sky go from yellow-pink to red to purple across the west rim. Then stick around for the stars, because on a clear night you’ll be able to take in more constellations than you dreamed possible. And stay as late as you like: it’s only a matter of yards back to your tent in Camp Shortoff.

3. Wilson Creek. I mentioned Gragg Prong earlier: last summer, I experienced a time warp here. Three hikers were lazing around a particularly generous pool at the base of a 20-foot drop. “Water’s nice,” said the one. “Jump in!” So I did, and was magically transported back 40 years to the brisk waters of Horsetooth Reservoir along Colorado’s Front Range, where the recent snowmelt worked spiritual wonders on those willing to sample it off a 30-foot cliff. Gragg Prong: the fountain of youth.

4. Joyce Kilmer-Slickrock Wilderness. Early one November a decade back I made a late-season passage up Slickrock Creek. Supposedly, there’s a trail along the creek, but mostly, the trail was in the creek. The densely wooded walls of the steep canyon created an especially acute sense of isolation: if aliens had landed and were now running the show I would have been none the wiser. I was losing sunlight (it was shortly after the time change) and I should have been keen on hurrying up a side trail leading to the rim and back to my car. But the growing darkness made me increasingly spellbound by the sense of isolation. A little scary, but a powerful moment.

5. Standing Indian Recreation Area. The hiking here is great, make no doubt. But twice we’ve done this trip and twice it’s been the campground bonhomie that’s stuck with me. After one particularly hot August hike of 12 miles, we returned to camp and plopped down in Kimsey Creek, which runs through the campsite. A bunch of adults, sitting like 6-year-olds and splashing about. After returning from another hike we started a fire around 4 p.m., early by campground standards. Soon, hikers began appearing with their camp chairs, settling in around the fire, chatting. Before we knew it it was dusk, then dark, then time to scootch our chairs closer to the fire to ward off the cold. What time is it, anyway? someone asked. It was almost 11. Fourteen of us with varying levels of familiarity had managed to sit and talk for 7 hours. When was the last time that happened? I wondered. The 1950s?

Those are some of our Whoa! moments. We’d love to share them with you over the next few months.

Join us for your Whoa! moment

Details on the trips mentioned above:

Appalachian Trail: Carvers Gap north to US 19E. This weekend, June 28-30. This two-night backpacking trip proved so popular we’ve scheduled a second to handle the overflow. This weekend’s trip is sold out; find details on our June 28-30 trip, go here.

Linville Gorge: an Introduction, May 17-19. Hiking Linville Gorge in full pack is a whole ‘nother level of backpacking. For backpackers not sure they’re at that level, we offer this introduction: Hike in two miles in full pack to set up basecamp at Shortoff Mountains, then hike with a daypack into the gorge to see what you’re dealing with. Learn more here.

Wilson Creek, May 31-June 2.There’s a theme to this trip: Going Solo. We spend the first night as a group, exploring, among other things, the aforementioned Gragg Prong. On the second night, we deposit backpackers in roughly 150-yard intervals to spend the night on their own. Great opportunity for backpackers interested, but uncertain, about going solo. Learn more here.

Joyce Kilmer-Slickrock/Citico Creek Wilderness, July 18-21. We hike in about four and a half miles on this trip, establish base camp at Naked Ground, then spend two days day hiking before hiking out. Learn more here.

Standing Indian, Aug. 15-18. From our car camp basecamp we’ll have two and a half days of hiking: Friday, an 11-mile loop taking in the Appalachian Trail and topping out on Standing Indian; Saturday, a 7.5-mile hike topping out on Albert Mountain and also including the AT; Sunday, two short waterfall hikes before heading home. Learn more here.