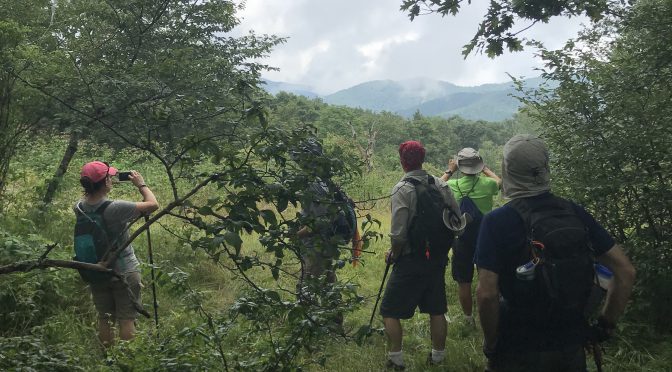 The trail was wilder than I remembered. Simply finding the trailhead at the overgrown intersection of trails atop the Naked Ground meadow was a challenge, keeping it was even more so less than 100 yards in. The 10 of us slowly plowed through a welter of every type of Southern Appalachian understory — from rhododendron and mountain laurel to blueberries and huckleberries, unable to even see the trail beneath our feet at times. Our only guide: the firm ground beneath. About a mile in, the real fun began.

“Downed tree,” I’d yell. The caution was relayed down the line. One by one we’d make our way over, under, around or through the massive poplars and chestnut oaks that criss-crossed the trail. Progress was excruciatingly slow: what on a maintained trail in a state or national park might have been an hour-and-half 5-mile descent to Wildcat Falls, our objective, was going to take close to three times that.

Well, I thought, they wanted a wilderness experience.

That was fun. Now what?

We launched GetBackpacking! four years ago as a way to introduce hikers to backcountry adventure. Getting into backpacking, we realized, was daunting, fraught by multitude of myths: the equipment is heavy, I’ll be eating berries and grubs, I’ll have to sleep on the hard ground. Worse, most people’s introduction came at the hands of experienced “friends” who had little sympathy or patience for a beginner. One of my favorite stories is that of an experienced backpacker who took a friend for the first time and loaned him a pack. The friend had a devil of a time getting the pack to cooperate: it wouldn’t balance, the shoulder straps dug into his shoulders, the hip belt was practically non-existent. “Oh,” it’s a terrible pack, the ythe experienced backpacker readily admitted. “It’s why I don’t use it anymore.”

So we developed a way to ease people into disappearing into the woods for days on end with everything they’d need to survive, and do so comfortably.

It’s a funny thing about those beginners, though: they eventually want to go on more challenging trips. So we started exploring sections of the surprisingly rugged Uwharrie Mountains, of doing sections of the Appalachian Trail, of exploring Wilson Creek, and, eventually, Linville Gorge, recognized in East Coast backpacking circles as one of the toughest hikes around. After doing Linville for a couple years, they wanted to know, “What else ya got?”

So we took them to the Joyce Kilmer/Slickrock/Citico Creek Wilderness.

Too rugged for logging

Word has it that when Ponce de Leon passed through far western North Carolina and eastern Tennessee in the 1500s on his way up from Florida, his expedition took one look at these rugged mountains and decided to detour around them. The Cherokee traveled through the region, but never settled. Even the voracious timber industry that plowed its way through the Southern Appalachians a century ago made little headway here in the Unicoi Mountains. There are higher mountains in the Southeast — we topped out at 5,300 feet on Stratton Bald, 1,300 feet below Mount Mitchell and the Black Mountain Crest — and Linville has a more swashbuckling reputation, but this 33,620-acre wilderness has a personality all its own. A personality with a wry sense of humor.

After hiking in a half mile or so in on Thursday the trail was blocked by a tumble of recently downed hardwoods. A variety of techniques — the turtle, the slow high-hurdle, the hug-and-roll — were used to navigate the downfall. Whew! we thought. Twenty-five yards later we rounded a bend and — oy! Again, we transformed from hikers to scramblers. The pattern repeated for a half mile: a stretch of teasing open trail, a roadblock. We get it — now please let us through. And the trail did, just as the last light of day was fading over Naked Ground.

Naked Ground, our basecamp for three nights, sits in a gap at 4,860 feet between 5,249-foot Haoe mountain to the northeast and 5,341-foot Stratton Bald to the southwest. It’s a lovely flat area, and easy to picture as the temporary trading ground (think modern flea market) that it was centuries ago. Today, it’s a confluence of trails, of Naked Ground Tail, of Slickrock Creek Trail, of Hangover Lead Trail. Finding them, though, amid the waist-high foliage proved a challenge in itself. After a false start or two we finally located Slickrock Creek Trail, which dropped about 2,900 vertical feet in 5 miles to our lunch spot, at Wildcat Falls. A Southern Appalachian Wilderness Society trail crew we met later told us there were at least 30 trees — big trees — down on that section. What we were expecting to be a two-hour descent at most took twice that. When we reached the confluence of Big Fat Gap and Slickrock Creek a little after 1 p.m., with 5.5 miles of uphill still to go, it was too late to tack on the extra little bit downstream to Wildcat Falls, a series of four drops (besides, we’d long since eaten). And that, curiously, was fine with our hikers. Here, I believe, is why.

Everyone loves a waterfall, but we see a lot of waterfalls on our trips. The endless drops on Gragg Prong and the into-the-abyss South Harper Creek Falls at Wilson Creek, the series of drops as the Linville River loses 2,000 vertical feet in 13 miles through Linville Gorge, the numerous falls in Panthertown Valley that contribute to it’s chamber-of-commerce nickname as the Yosemite of the East. A good waterfall would have been nice. But that’s not the allure of Joyce Kilmer/Slickrock.

What draws people to this remote outpost is the promise of virgin forest, a promise fulfilled mostly in the 3,800-acre Joyce Kilmer Memorial Forest, where trees, some more than 400 years old, reach heights of 100 feet or more. But the JKMF isn’t part of the wilderness and it has a peculiarly sterile feel, almost like a museum of really big trees. They stand as if on display, and seem oddly out of context.

There are only small pockets of virgin forest in the adjoining Slickrock Creek Wilderness. When you enter them, though, you feel that something is different: there are fewer trees, their more stately, there’s less understory and the light dims slightly. Passing through a small mountainside of old growth on Jenkins Meadow Trail, I caught up with Biju. “That was old growth,” I said. He stopped and turned, his eyes big. “I know,” he smiled. “You could sense it.”

These old growth oases are worth the effort it takes to penetrate a wilderness. But what I find really inspiring exploring Slickrock and other wilderness areas is what you won’t see: plants that don’t belong. The dearth of outside visitors with commercial intent, the absence of development (especially by the invading Europeans) means fewer invasive species have been introduced to dominate the landscape. While whacking down the Slickrock Creek Trail and squeezing through especially tight passages over Stratton Bald and Hangover Lead I was struck by the diversity: within 20 feet there must have been 40 different plant species — that I could see — living in harmony. Maybe they weren’t all native, but none had the step-aside audacity of, say, Japanese stilt grass or kudzu. It was a naturalist’s dream. A hiker’s, too.

It was a challenging four days of hiking. The 75 or so downed trees we had to negotiate, the tight squeezes through overgrown trail, the seemingly endless climbs. We were graced with good weather, though: the one two-hour rainstorm we endured came after we’d gotten back to camp and eaten: we were able to crawl into our tents and nap, read, listen to podcasts while the rain drummed away on our tents. When the Jenkins Meadow Trail came to an end Sunday and we were back at our cars, we were glad to be there — at least for the time being.

“So,” Henry asked as we prepared for the long drive home, “will we be coming back here again this fall? Or will this be a once a year thing?”

Once a year, I was about to say. Then I thought about all the terrain left to explore both here and across the way in the adjoining Citico Creek Wilderness.

It may be next year before we return to Joyce Kilmer/Slickrock/Citico Creek. But we’ve got a lot of trips until then:

GetBackpacking! Wild, Wonderful Wilson Creek, Aug. 2-4, Wilson Creek area of the Pisgah National Forest. This trip is less about hiking with weight on your back, more about setting up basecamp and exploring and enjoying the waterfalls and views in the Wilson Creek area, Mortimer. Learn more and sign up here.

GetHiking! Classic Escapes: Standing Indian and the AT, Aug. 15-18, Standing Indian Recreation Area, Nantahala National Forest, Franklin. From our car camp basecamp, we’ll do hikes of 10+ miles on Friday and Saturday, do a shorter waterfall hike Sunday before breaking camp and heading home. Learn more and sign up here.

GetBackpacking! Linville Gorge: Advanced Skills, Linville Gorge Wilderness, Linville, Aug. 23-25. Our annual pilgrimage into one of the wildest spots on the East Coast involves a night of camping on the rim, one night in the gorge, two river crossings, and a heckuva challenge. Learn more and sign up here.

GetBackpacking! Intro to Backpacking, training on Saturday, Sept. 14, at Morrow Mountain State Park, graduation trip to South Mountains State Park Oct. 4-6. Not a backpacker but intrigued? Our class begins with a two-hour gear session at a Great Outdoor Provision Co. near you, progresses to a five-hour training session at Morrow Mountain State Park, and culminates with a two-night graduation trip to South Mountains. Learn more and sign up here.