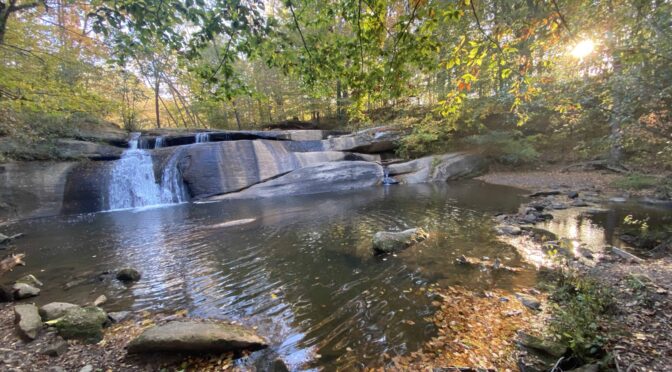 As I’ve mentioned over the last couple of months, next year has been deemed Year of the Trail in North Carolina and there’s going to be a lot going on. For starters, the State Legislature in 2022 allocated $29.15 million in funding for the Complete the Trails Fund. That money will fund State Trail projects as well as projects deemed :shovel-ready” — that is, the land has been purchased and the trail designed; all that’s needed now is the money to build it. Expect a lot of “Excuse our Mess” signs out in the woods next year.

Activity-wise, the Great Trails State Coalition, a non-profit created to promote North Carolina trails in 2023 and beyond, hopes to see a trail-related event — hike, bike ride, paddle trip, horseback ride — conducted in all 100 North Carolina counties in 2023. And the N.C. Department of Natural and Cultural Resources is working up a full slate of fun as well, including programs through their PATH — or Parks and Trails for Health — program. But it’s another Department of Natural and Cultural Resources program that has me suggesting you get out your 2023 calendar (or buy one in the first place).

Hometown Strong is an initiative of Gov. Roy Cooper that works with the state’s 80 rural counties to boost their prosperity. In general, communities identify problems they need help with — from modernizing their websites to overhauling their water treatment systems — and Hometown Strong’s policy analysts work to help them solve those problems, in large part by helping them find available funding.

Sometimes, though, it works in reverse. In the case of Year of the Trail, Hometown Strong identified 11 communities with unheralded — or underheralded — recreational resources, and is working with those communities to shine a light on said resources. This will take place in 2023 in the form of trail day weekends celebrating these resources with street fairs and guided hikes and trips. This is where you get out your 2023 calendar to jot down the following trail festival dates:

Other communities with dates yet to be determined are West Jefferson, Edenton, and Shelby.

With the possible exceptions of Morganton and Old Fort, you may be looking at this list and wondering: I’ve never heard of some of these places. Who on Earth put this list together?

In July, I was brought aboard Hometown Strong as an ecotourism advisor. It’s a dream assignment because in my 30 years of writing about the outdoors in the Southeast, and my 10 years of guiding trips, I’ve been all about uncovering the state’s hidden gems. From the state parks less visited (Medoc Mountain), to the back entrances to popular spots (the Longbottom Access to Doughton Park), to the places you might not think to visit unless you think about the right time to visit (the Great Dismal Swamp, in the dead of winter).

Basically, the places best accessed through the towns Hometown Strong will celebrate in 2023.

But … Elizabethtown? you ask.

You bet, Elizabethtown! (For those of you scratching your head, Elizabethtown is in the Coastal plain, southeast of Fayetteville.)

And Eden? I don’t even know where that is? 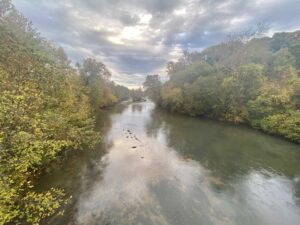 It’s north of Greensboro, near the Virginia line. It’s also where we recently relocated to, in part because of the varied outdoor opportunities. (I can be on the Smith or Dan rivers in less than 10 minutes after getting a hankering to paddle.) And where hikes such as the one in Mayo River State Park take you to surprising finds such as Deshazo Falls, pictured above.

Through the end of this year, I’ll be taking you to the 11 communities we will celebrate in 2023. I’ll provide an overview of the activities and a hint of the event itself (a “hint” because some won’t be fully conceptualized until after the first of the year).

In fact, some of you may even scoff at the notion of North Carolina as the “Great Trails State.”

Perhaps even more impressive is everything that’s to come. There’s the 159 trail projects identified by the Great Trails State Coalition as waiting to come out of the ground. There’s the Fonta Flora State Trail, which is seemingly growing by the month and will one day link Morganton and Asheville. There’s the 40-mile Northern Peaks State Trail, the northern terminus for which will likely break ground in 2023 on Paddy Mountain near West Jefferson. There’s footbridge construction in the works that will result in a 12-mile continuous stretch of the MST near Elizabethtown, resulting in one of the longest completed stretches of the MST east of Smithfield.

Trails are in demand in North Carolina and the money to build them is becoming available. That’s thanks in part to the State Legislature and its visionary Complete the Trails Fund. But also to the communities, especially the smaller ones, willing to allocate often sparse resources to create trails. Those communities are the ones we will celebrate in 2023.

So, again, mark your calendars.