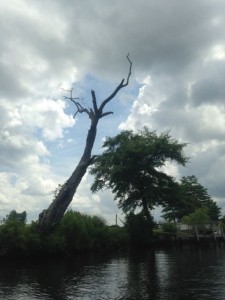 We are, in case you’ve been trying to ignore it, on the cusp of the holiday season. The crazy, demanding, nerve-wracking, gift-wrapping, inlaw-visiting, party-attending, work-must-go-on-and-then-some holiday season.
Which is to say, we’re entering a time of elevated stress and precious little time to do anything about it.
Or so you think.
True, you may not have time to burn a day, head to the mountains and hike 12 miles. But that’s not necessarily what you need. Sometimes, just an hour in the wild can ease your defcon level and reestablish you as a functioning member of society. And the good news: there’s likely one of these restorative escapes — a sliver of wild terrain that not many people may know about — close to you.
Throughout the holidays, we’re going to share some of these retreats statewide on the BlueCross BlueShield of North Carolina blog.  We’ll do five posts in all, each focused in a geographic area, each with five escapes. Our first post, on escapes at the coast, runs today. You can find it here.
Here’s a look at our upcoming posts:

Stressed by the holidays? Relief is a quick natural retreat away.