After paying weekly visits to Seven Mile Creek Natural Area west of Hillsborough for eight months, last week I finally had the chance to share this find with other hikers. They were equally impressed.

It was the first of our weekly GetHiking Sunrise, Sunset Summer Beat the Heat Hikes, and it lived up to the hype. Thunderstorms that had been threatening to flare throughout the afternoon vanished by hike time (7 p.m.) and we were treated to the late day light that’s special to the season. As the light faded, over rocky Seven Mile Creek and the surrounding low hills, we could feel it taking the temperature with it. We weren’t exactly chilled by hike’s end — the temperature was 89 less than an hour before the hike — but between the sheltering canopy above and a 7-degree drop by hikes end, we were no longer melting into our boots. You can see a video of that hike last Wednesday on Friday’s post. read more 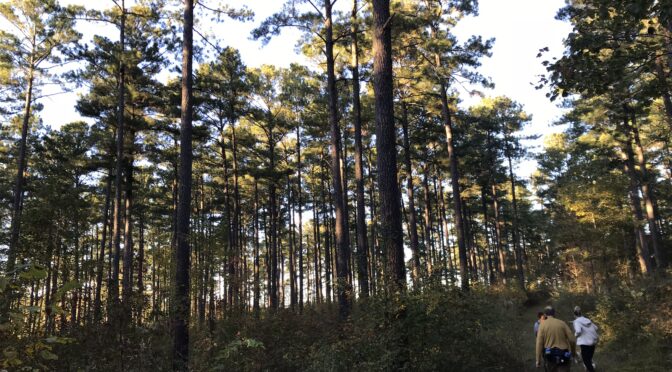 It was a Wednesday evening four years ago about this time and we were huddled in a splotch of shade just off the parking lot, waiting for the last hikers to arrive. It was a few minutes before 6; the temperature was trying to drop from the day’s high of 88, with a humidity that seemed to match. We hadn’t taken a single step, but already we were aglow. read more

Our two favorite times to be in the trail in winter: sunrise and sunset. They’re great year-round, frankly, but much more accessible in winter: Sunrise today is at 7:21 a.m., sunset at 5:34 p.m.

If you have to ask what’s so special about these two golden hours of the day, then you’re probably not a hiker. Or possibly in possession of a pulse. Personally, we love the moment-to-moment change as the sky evolves from yellow to pink to orange to crimson to purple. If we sense the conditions for a good sunset, we’ll dash to the local summit in town, Occoneechee Mountain, which affords an open view to the west: sunset over the Eno River Valley is one of the best. We’re pretty crazy about certain other sunsets as well: from Shortoff Mountain at the south end of Linville Gorge, from atop Shining Rock in the Pisgah National Forest, from Little Long Mountain in the Uwharrie National Forest, from Hump Mountain on the Appalachian Trail. We’ve even seen the queen mother of sunset phenomena: the elusive green flash, a prismatic neon burst that lasts just a second or two, which we saw over the Pacific Ocean years ago in Hawaii. read more

Monday — never an easy time for the outdoors enthusiast. After a weekend of adventure, returning to the humdrum work-a-day world can make one melancholy. To help ease the transition, every Monday we feature a 90 Second Escape — essentially, a 90-second video or slide show of a place you’d probably rather be: a trail, a park, a greenway, a lake … anywhere as long as it’s not under a fluorescent bulb.

One thing we’ll miss now that fall is here and the days very quickly getting shorter is our evening hikes. Savoring the fading sunlight of day is perhaps our key motivator to hit the trail. With the sun setting at 8 p.m. or later, there’s plenty of time after work to enjoy the period known as eventide.

So enjoy this late-day gift while you can. As incentive to do just that, we bring you 90 Seconds of late daylight on the trail.