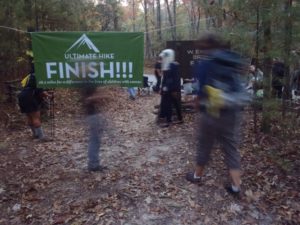 Two weeks ago, I told you about the Ultimate Hike. I may have written a reminder as well. In either event, here’s another, this one to remind you that the 2013 Ultimate Hike season begins Saturday at 9 a.m. at Umstead State Park.
Ultimate Hike is the chief fundraiser for CureSearch for Children’s Cancer. CureSearch is a nonprofit that traces its roots to 1987. Though its name has changed over the years, its mission has not. The nonprofit funds research efforts to fight children’s cancer.  If there’s a more noble effort to support, I’m pressed to think of it.
And if there’s a better way to support the cause — hiking to raise money for children’s cancer research — I’m hard-pressed to think of it, either. Tomorrow marks the start of a 12-week training program that will culminate with us hiking 28.3 miles on the Foothills Trail straddling North and South Carolina. The key component of the training program is a series of every-other-weekend hikes that will grow increasingly longer. Tomorrow at Umstead, will start with a short hike (of 2, 4.5 or 6 miles, hiker’s choice). We’ll be back on Aug. 24 with an 8-mile hike along the Eno River. Subsequent hikes will be at Raven Rock State Park, on the Mountains-to-Sea Trail through the Triangle, at Hanging Rock State Park and in the Uwharrie National Forest. We’ll also do a series of shorter mid-week hikes designed to get hikers used to hiking in the dark. (Why? Because to hike 28.3 miles in one day you have to hit the trail pretty early —  4:30 a.m., to be exact)
Want to find out more? Then come out tomorrow and test-drive the Ultimate Hike. We’ll gather at 9 a.m. at Picnic Shelter #2 at Umstead State Park’s Harrison Avenue entrance (off I-40). We’ll have bagels and coffee, we’ll talk hiking. Then, around 10, we’ll hit the trail.
And if you’re thinking, “I’m not really much of a hiker, this probably isn’t for me,” then cease that line of thinking. This hike and the 12-week training program is exactly for you: that’s what the training is all about. Again, come out and we’ll talk.
And remember: we won’t just be talking, we’ll be hiking. read more