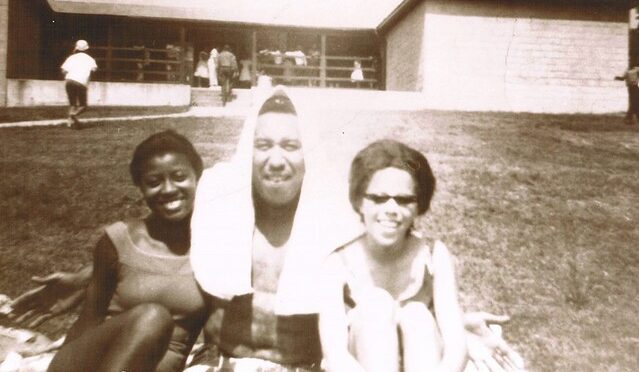 When I moved to the Raleigh area at the beginning of 1992, I spent a lot of time at Umstead State Park. It was a 10-minute drive, you could hike and mountain bike, and, lucky me, I happened to live on what I considered to be the most interesting side of the park, the Reedy Creek side, off I-40. Access to the mountain bike/equestrian trails was easier, you could pick up two long trails from the parking lot, even the physical facilities — the picnic shelters, the restrooms — seemed more inviting.

I’d been exploring the park for about three years before I learned the history behind the park’s two sides, my Reedy Creek side and the Crabtree Creek side off of Glenwood Avenue. Umstead, it turned out, had been two separate state parks: Crabtree Creek Recreation Area and Reedy Creek State Park, the latter formed in 1950 with 1,000 acres as a separate park for African-Americans.

1950 was also the year that the first state park facility in Virginia opened for African-Americans. In 1948, Maceo Conrad Martin, of Danville, Va., tried to enter nearby Staunton River State Park, one of seven state parks in Virginia at the time, and was denied entry because of the color of his skin. He took the Virginia Department of Conservation and Development to court, arguing that state parks weren’t abiding by the law of the day by providing “separate but equal” facilities for African-Americans. That lead to the opening of Prince Edward State Park for Negroes in Prince Edward County. That park also had a white counterpart: Goodwin Lake Recreational Area.

(South Carolina was a bit ahead of its time. According to the South Carolina State Parks website, “As early as 1938, African American leaders worked to secure access to state parks. Their efforts resulted in the establishment of separate recreation areas for black citizens. These included portions of Lake Greenwood, Hunting Island and Huntington Beach state parks. The system also included segregated African American parks at Pleasant Ridge, Campbell’s Pond and Mill Creek.)

Efforts continued through the 1950s to create more facilities open to all. A second suit was brought in Virginia in 1951 by a group of African Americans denied entry to what was then Seashore State Park (now First Landing) in Virginia Beach. Those plaintiffs sought a continuance, however, based on the potential implications of a lawsuit rising through the courts, Brown vs. Board of Education. When the U.S. Supreme Court ruled on May 17, 1954, that segregation of pubic schools was unconstitutional, the implications were clear: segregation of any public facilities was unconstitutional. Including state parks.

Despite the ruling, public institutions continued to fight integration. Rather than integrate, the Prince Edward County Schools simply shut their doors for several years. The Virginia Department of Conservation and Development considered doing likewise, or to lease their parks to private contractors who might be exempt from the ruling. The situation didn’t begin to change significantly until passage of the Civil Rights Act of 1964, which outlawed discrimination based on race, color, religion, sex, national origin (and eventually, sexual orientation and gender identity). In Virginia, Prince Edward State Park for Negroes and Goodwin Lake Recreational Area were merged, and in 1976 became Twin Lakes State Park. In Raleigh, in 1966, Reedy Creek and Crabtree Creek were merged and became William B. Umstead State Park (named for a conservation-minded former governor).

This bit of history has a particular resonance today. Our state parks have played a particularly vital role in helping us stay safe and healthy: in North Carolina, a record 19.8 million people visited the state’s 41 state parks and recreation areas in pandemic-plagued 2020, and other public land managers report record attendance as well. In a year when the outdoors has been a safe refuge for so many, it’s hard to imagine being denied that escape based on the color of your skin.

At least, it should be hard to imagine.