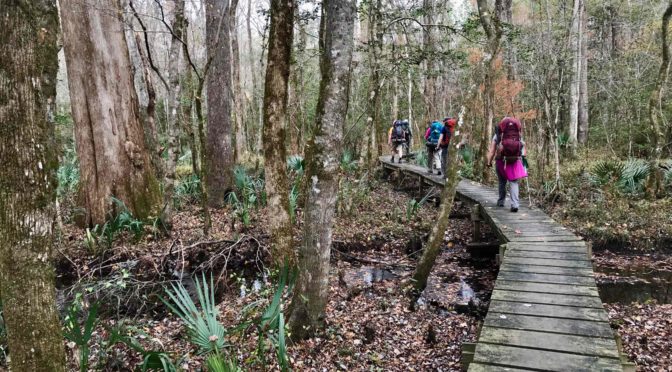 We love hiking in winter. Its allure — cool temperatures to keep you moving, dry air, and awesome light, to name three — go largely unappreciated. Still, it’s a time for shorter hikes. Shorter hours of daylight, the rapidly disappearing late-day sun, the cold early and late. It’s a great time to be out, just not for prolonged periods of time.

Now, though, that starts to change. For today we celebrate Imbolc, the Celtic tradition celebration that marks the midpoint between the winter solstice and spring equinox.

Yup, winter is half over. And as if to be teased by the prospect, we’re looking at temperatures in the 60s at the end of the week. They won’t last, of course (see Sunday’s forecast for yet a another weekend of wintery precip). But we have, officially, turned the corner: the days are getting longer and the temperatures, eventually, warmer. That means we will soon be able to spend more time on the trail. Which brings us to a post we typically do this time of year on longer hikes, both at the coast in the Piedmont.

Since we’ve done this post before, we aren’t going to repeat the whole thing. Rather, we’ll give you a quick synopsis of seven of our favorite long hikes in the region, then refer you to a previous post where you can find details to help you take the hike on your own.

There aren’t a lot of long trail options along the coast (unless you count the 301-mile “hike” along the beach from Virginia to South Carolina). But of the two long trails that do exist, both in the Croatan National Forest, both are good ones.

The Weetock, located on the south flank of the Croatan National Forest along the White Oak River, was blazed between 2001 and 2003 by the Carteret County Wildlife Club.  A significant portion of the trail was rerouted by the USDA Forest Service in 2007; then, in 2018, a significant portion of the trail was again rerouted, by Hurricane Florence. Today, the first six miles are a pleasant, easy-to-follow ramble through coastal forest on well-marked, well-maintained trail. The last half? If you like adventure and have a keen sense for sniffing out a barely discernible trail, you’ll have a blast. Best hiked between November and mid-April.

Croatan National Forest: Neusiok Trail
21 miles
Havelock
Whereas the Weetock Trail may lose its way on occasion, the Croatan’s other major trail, the Neusiok, has done a good job of staying the course since its creation, also by the Carteret County Wildlife Club, in the early 1970s. The trail runs from the Pine Cliff Recreation Area along the southern shore of the Neuse River, southeast to the Oyster Point Campground. Florence also did a number on the Neusiok, but it was completely restored by the CCWC last year. The northernmost seven miles are the most diverse, passing beneath a bluff overlooking the Neuse, then heading through a pine savannah and on to a rolling stretch before going pancake flat at NC 306. The southern two-thirds of the trail is flat and more typical of a coastal forest, with long stretches of boardwalk through marsh. Also best hiked before April.

A figure-eight double lollipop loop that exposes you to the best of Umstead. Starting from the Harrison Avenue entrance (a k a the Reedy Creek entrance), take the Company Mill Trail over three small ridges to Crabtree Creek. Cross the green metal bridge and go right. You’ll follow Crabtree for a spell, climb to the bike and bridle trail that bisects the park and continue. Shortly, you’ll hit a kiosk indicating a short spur to the Sycamore Trail; do the 4-mile loop portion of Sycamore, then return to the Company Mill Trail and hike the portion you haven’t. Lots of up and down on this hike, but nothing grueling. Be advised that the first mile of Company Mill, down to Crabtree Creek, can be crowded on a nice weekend; it becomes less popular from there.

Starting from the trailhead off Tot Hill Road, hike the Birkhead Mountain Trail south for two miles before hitting the popular loop that Boy Scouts, among others, have been using for years to cut their backpacking teeth. Where the Robbins Branch Trail enters from the right, continue straight on the Birkhead for two miles. Note that despite the fact this is a designated wilderness, the trail is well blazed. After two miles, go right on the Hannahs Creek Trail, where, for the first time, you abandon ridgelines in favor of passages along holly-clogged creeks. After a mile and a half, go right on the Robbins Branch Trail, which climbs a ridge before dropping to its namesake creek and rejoining the Birkhead after 3.2 miles. A great hike year-round.

Hanging Rock State Park: Moore’s Knob and Indian Creek trails
11.5 miles
Danbury
Starting from the Visitor Center, the 4.3-mile Moore’s Knob Loop Trail offers a dandy warm-up, passing the lake and bathhouse, then probing a tunnel of holly. About a mile in, it’s time to get down to business, with a long ridge ascent to Moore’s Knob. Continue the loop back to the Visitor Center for Round 2: the Indian Creek Trail descends to Hidden and Window falls, then drops its load of hikers before continuing another three miles to the Dan River. And back.

The 12-mile Ridgeline Trail joins two state parks — Crowders Mountain and Kings Mountain in South Carolina, plus S.C.’s Kings Mountain National Military Park. Start from the Visitor Center, hike to the base of Kings Pinnacle — don’t pass the opportunity to take the short spur to the top for great views— then continue south through rolling Piedmont countryside to the park’s Boulders Access, then on to the South Carolina state line (once the trail hits the Palmetto State, it is flat for the remainder). Avoid the summer.

Starting upstream on the Eno at the Pleasant Green Access, hike up a bluff overlooking the Eno, around an abandoned quarry, through surprising stretches of steep climbs and sharp drops. Pass under Cole Mill Road and the trail mellows, heading through flood plain forest and occasionally taking a more upland route. At Guess Road you hike up to the bridge, stay on your side of the road, cross the bridge, then curl under the bridge to continue downstream. A little over a mile downstream, and less than a mile from the end of the hike you run into Sennet Hole, a pool on the Eno above the mill pond where even on the hottest of summer days you can find cool water 10 to 15 feet down. End at West Point on the Eno city park. Because of this, it’s a good summer option.

Learn more about these hikes, plus find three more long hikes in this post on long trails from February 23, 2014.

We’ll tell you how to put these longer hikes to work for you, especially if you have big hiking plans for 2022, as we discuss training.