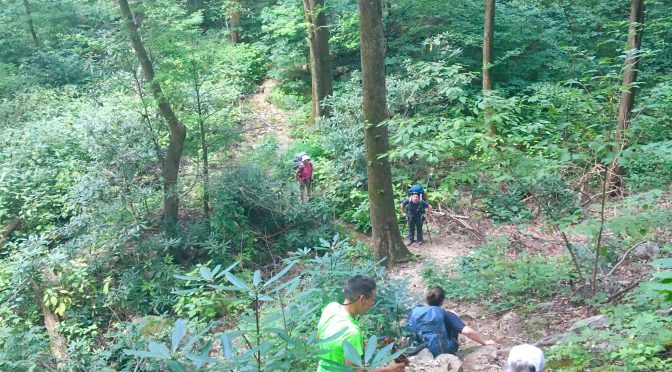 This picture means a lot to me because everyone in it still speaks to me. In fact, they’ve all gone on trips with me since.

The photo was taken last August on a GetBackpacking! trip into Linville Gorge. It was a three-day, 22-mile trip that involved two crossings of the Linville River, a knee-busting descent into Chimney Gap followed by a calf-burning ascent out, navigating a river section that had little interest in being navigated, and this drop into the gorge on the Leadmine Trail—a path that looked relatively innocuous on the topo map. In reality, it’s a path best tackled by tossing your pack down the mountain first, then scooting down after it. You know how trails rarely look as steep in photos? Not this one. read more

I’ve been spending a lot of time along the Blue Ridge Parkway of late, exploring the Mountains-to-Sea Trail. I’d be spending even more time if the Parkway facilities, specifically the campgrounds, were open. Which they soon will be.

The National Park Service has announced 2012 opening dates for their seasonal facilities along the Parkway. I’m finding them useful for trip planning, figured you might, too. Here are some key locations for the pedestrian explorer, when they open and some thoughts for how these locations might play into your plans. For locations, go here for a Parkway map. read more