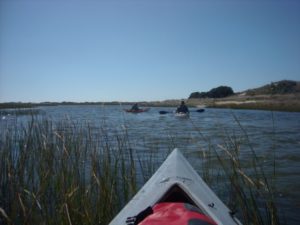 Celebrate the last weekend of September with a kayak trip at Hammocks Beach, a celebration of and on Raleigh’s Walnut Creek Greenway, and a salute to birds at Chimney Rock

Summer can be a little steamy out on the sounds in the marshes of the Carolina coast. But late September? Cooler air temps and cooling water temps (but still warm enough for a dip) make for perfect kayaking conditions. That’s the thinking behind Saturday’s kayak trip at Hammocks Beach State Park. Paddle about the intricate marshes around Hammocks Beach; kayak, paddles and lifejackets provided. read more