How close is Raleigh’s long-awaited House Creek Greenway from being completed?

Rather than words, we’ll take you on a ride so you can get a feel for the greenway and just how close it is to being done. The one really tall boardwalk is at the very south end of the new greenway, where House Creek connects with Raleigh’s Reedy Creek Greenway. read more

In Raleigh’s rapidly expanding greenway network, 3 miles isn’t a lot. The system consists of close to 70 miles at this point, and this 3-mile stretch is dwarfed, sizewise, by another stretch also under construction: the 28-mile Neuse River Trail, which opened its first 6.5-mile stretch in October and expects to be completely done — from the Falls dam south to the Johnston County line — in 2013. read more 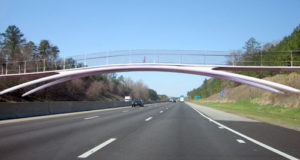