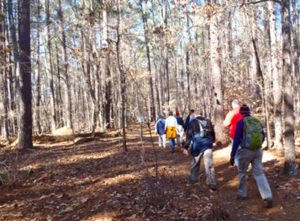 Last week, I wrote about finding enlightenment through a race report filed by fellow Uwharrie Mountain Runner Charles West. After doing the UMR’s 40-mile version (I did the 20), he shared 11 things he learned from the race. Most were about performance, about nutrition, gear, tactics. I was most struck by point No. 11:

“The Uwharrie National Forest on a cloudy, foggy, rainy, overcast day is a magical place that’ll remind you of why it’s so awesome to be alive and do something epic with incredible people who do things that amaze and inspire you.”

It was the part about doing epic things with others that had particular resonance. When it comes to exploring the outdoors, I’m a bit of a loner. In part, that’s by professional necessity: As an outdoors writer, my workweek — my time to scout and explore — tends to be Monday through Friday, a time when my usual playmates are otherwise occupied. But it doesn’t always need to be that way; with a little planning and negotiating on the home front, I can get out on the weekends. That and Charles’ No. 11 lead me to a new goal for the year, one guaranteed to get me out with others: Do at least three Meetup events every month.

My first under this new commitment was Sunday, and even though it was on trail I’ve done more than a hundred times — Umstead State Park’s Company Mill Trail with the Sycamore Loop tacked on — this trips was perhaps the most illuminating, thanks to my fellow hikers. For instance:

From Holt I got the lowdown on Danville, Va., a town of mystery based on recent visits. Holt lived in Danville for a dozen years, during which time he saw the town shrink from a population of 58,000 to 43,000. He saw the Dan River Mills, which once employed 18,000, disappear after being purchased and dismantled by an Indian company in 2006. When he and his family moved to Danville from Richmond, you could buy a 4,000-square-foot 1890s Victorian mansion in good shape for far less than a 2,400-square-foot split-level in Cary.

From Chuck I learned a lesson in semantics. When he mentioned having lived in South Carolina, I asked about the wild places he’d been. Without hesitating, he launched into a detailed account of party life in Columbia. Much wilder than I bargained for.

From Pam, a fellow baby boomer, I learned that for her, our nine-mile trek was more of an exercise appetizer. “I teach exercise classes,” she told me at the trailhead. “Sometimes three a day.” Sometimes three a day in three different locations. And I thought I had stamina.

From Phyllis I learned that the years leading up to retirement can actually be more of a warm-up. “I’ve been taking classes at Tremont,” she said near the end of the hike. That would be the Great Smoky Mountains Institute at Tremont, where she’s working toward her certification as a naturalist/educator. She plans to retire, sorta, in a year and a half, then volunteer to lead nature programs.

From Sean I learned anew what a great area this is if you’re into exploring the outdoors. Sean and his family moved to the Triangle a year and a half ago and he’s only starting to renew his affair with the outdoors, an affair that began growing up in the wilds of California. Despite having been weaned in the Sierra Nevada, he was smitten with Umstead.

From hike leader Brian I learned what it takes to be a good hike leader. Well, yes, constantly yo-yoing from the front of the pack to the back, making sure everyone’s doing well, making sure no one has dropped off the back. For me, though, his credentials were verified when, seven miles in, he suddenly announced, “Hey, I almost forgot — I’ve got chocolate!” That never happens when I hike alone.

When I got home late Sunday afternoon I checked my Meetup groups for upcoming outings. A Wednesday paddle on the Eno with Simply Kayaking looked good (if I can get out of a root canal), there’s a chance to check out the new Clayton/Neuse River Greenway with the Raleigh Weekday Outdoor Activity Group on Friday, and the Triangle Rock Club’s Climbing Meetup has an after-hours event Sunday at the climbing gym from which it gets its name, which I’m already signed up for.

Doing three Meetup events a month looks like it won’t be so hard. The hard part could be doing no more than three a week.

In less than a decade, Meetup groups have replaced traditional outing clubs as the way people get together to get out. Take hiking. A decade ago, there was maybe one true hiking club in the Triangle (and that one was limited to people with IQs over 150.). A quick search of hiking Meetups in the area came up with 37 currently in existence, from the behemoth Triangle Hiking and Outdoors Group, with 4,441 members, to the 68-member Johnston County Hiking & Outing Group.  To find a local Meetup that meets your needs, go to the Meetup Web site, and plug in your passion and ZIP Code; you should find a Meetup that meets your needs. And if you don’t, start one.