Explore Cherry Point via a triathlon, participate in the VIII Lake Lure Olympiad or try your hand (and feet and sense of balance) with yoga on a paddleboard. Just another summer weekend in North Carolina.

I’m partial to events on military bases, in part because it gives civilians such as myself access to the otherwise inaccessible, to a world we otherwise don’t get a chance to see. That exposure is compounded when the event is a triathlon, which lets you run and ride through these forbidden lands. read more 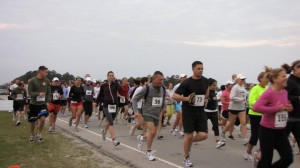 Get to know a new place on foot, get to know the season that started Tuesday.

When I was in high school I had a part-time job on the old Lowry Air Force Base in Denver. I took the job, in part, so I could get inside the inner sanctum of a military installation just to see what it was like. It wasn’t as exciting as I expected; In fact, the only significant difference between it and the outside world was that it was a whole lot cleaner. Still, it was cool being allowed in this land forbidden to mere civilians. read more