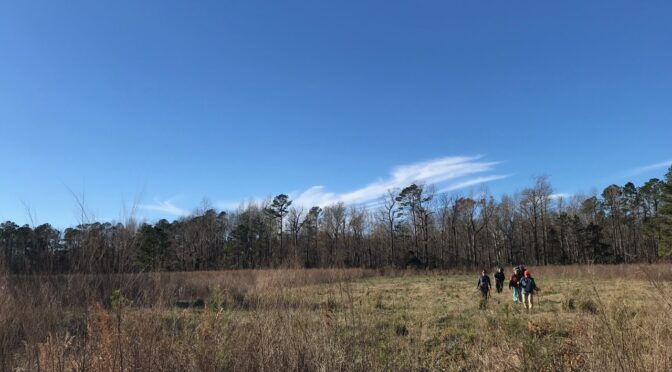 Just as a retailer’s thoughts turn to Christmas once Halloween has passed, our thoughts turn to the coast once the fall color starts to fade here in the Piedmont. While I love a summer’s day at the beach, the coast — and coastal plain — are at their most alluring in late fall and winter. A week at a vacation beach house is swell over the summer, but a week at the coast in winter leaves memories that aren’t soon forgotten.  read more

Today we revisit a topic we first wrote in 2012: 10 of our favorite winter hikes. Hikes that, for various reasons, are especially good hiked in cold weather. For some (at the coast, for instance, it’s the only time you can hike them, lest you have an immunity to squadrons of dive-bombing mosquitoes and an unusually high tolerance for things that slither. For others, it may be a view otherwise obscured by a lush, full forest, or for the opportunity to hike in evergreen conditions, or because of exposed terrain that lets winter’s warming sun shine in.   read more

Celebrate your independence this July 4 weekend by exercising your right to pick the adventure of your choice. And in this free market of North Carolina adventure, you’ve got plenty of options, from a walk celebrating history at the coast, to mountain firecracker 5Ks, to an adventure of your choosing to the beat of live music. read more

I’d just finished a gorgeous day on the groomed trails at the White Grass ski touring center in West Virginia and was returning my rental equipment.
“How was it?” asked the ski rental guy.
“Incredible!” I oozed. “I can’t wait to go again.”
“You know,” he said, “Our rental skis are for sale.” At a price, it turned out, that was more than I could afford but too good to refuse. I’ve used them a dozen times since; I’m hoping to make it a baker’s dozen tomorrow.
As Winter Storm Leon (sheesh) makes its way up the coast, the prospects are good for cross-country conditions, from the Triangle into the coastal plain. As of this morning, parts of the Triangle were expected to get up to six inches of snow — with points east forecast to get 10 inches or more.
On the right kind of trail, six inches is all it takes to make or decent cross-country conditions. Where might one find the right kind of trail?
Glad you asked. read more