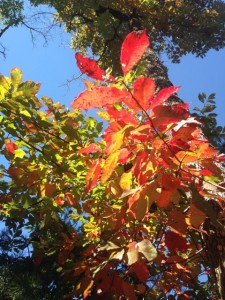 Some quick notes for the weekend:

Saturday, will be cool (50s) and rainy in the Piedmont. If you’ve got stuff you need to get done (yardwork excluded), this would be the day to get it done because —

Sunday will be dry, sunny and cool (50s) in the Piedmont. Sunday could also be your last chance to catch good fall color in the region. Wondering where to go? read more

Some rue the passing of summer, some despair over the approach of winter.

Others — hikers — revel in the fact it’s October.

With cooling temperatures, generally sunny skies, dry air and the natural world in transition, it’s hard to imagine a better time to be on the trail. Early in the month, the change begins on mountain peaks above 5,000 feet. As the days progress, the palette of autumn slowly descends — 4,000, 3,000, 2,000 feet. Finally, it reaches the Piedmont. And by the beginning of November it’s at the coast. read more

Once a week, and sometimes twice, I lead a hike through GetHiking! Triangle. I enjoy every hike, often for different reasons. Sometimes it’s for the views, sometimes for a particularly scenic stretch, sometimes for a seasonal treat, such as wildflowers. Always, I look forward to hiking with friends, including ones I’ve yet to meet.
I’m a little more excited than usual, though, about this Saturday’s hike in the Wilson Creek area at the base of the Blue Ridge escarpment below Grandfather Mountain. It’s a deceptive area: it doesn’t have elevation in mountain numbers; rather, what it does have, it has in concentration. Steep climbs, steep descents, lots of rock, lots of water. It’s exhilarating, occasionally exasperating (the trails aren’t always well marked or easy to follow). The topography is extreme.
As I was planning this trip — about eight miles on the North Harper Creek and Harper Creek trails — I came across a trip report from 2011 on our sister site, nchikes.com. It comes from husband-and-wife explorers Juli and Keith Spring, who hiked a nearby section of Wilson Creek as part of the “Backpacking North Carolina Challenge.” The report is short, but gives a good feel for the Wilson Creek experience. It starts below, and makes for a nice, quick escape on a Tuesday.
Enjoy! read more

Through March in the Piedmont we’d seen only scant evidence of spring: first-responder wildflowers including trout lilies (which can appear as early as late February), bluets and a sorrel or two. Spring was kept in the deep freeze in March, was good news if you were otherwise occupied during the month and couldn’t get out. read more 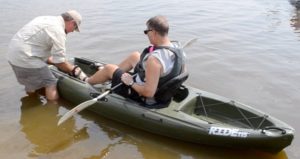 Looks like a hit, dry weekend over much of the state, with temperatures suitable for doing a raft of activities.

Rafting, for instance, which I would be doing if I were in Charlotte, where the mercury is supposed to hit 97 Sunday. Sounds like a good reason to visit the National Whitewater Center. Other thoughts (in addition to yesterday’s suggestions): read more