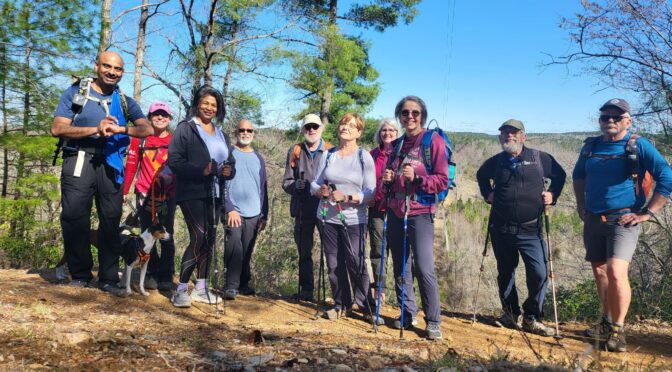 I’ve been leading hikes and backpack trips for more than a decade, and it didn’t take long for me to realize that most of my hikers were older than I’d expected. We’d have a few people in their 20s, then a big gap, then a whole lot of people in their 50s. And 60s. And 70s. It eventually dawned on me why: people in their 20s have fewer commitments and more time to play. Same with people who are done raising kids and are reaching retirement age.  read more

“Uh!” Kathy groaned about three quarters of the way up the grinding march up to Moore’s Knob at Hanging Rock State Park. “I wish I’d started doing this when I was younger.”
“Better late than never,” her sister Judy offered.
“Yeah,” I added, “and hiking is something you can do for another 40 years.”
Kathy looked at me like I was nuts. “I’ll be 60 this fall!”
OK, maybe another 20 years. The point, as sis so eloquently put it, it’s never too late to start an activity, especially when that activity is health-friendly hiking.
According to a 2005 report (the most recent year for which I could find demographic information for free), the average age of a hiker was 38 and nearly a third of the nation’s 76.7 million hikers were 45 or older. That’s about 25 million hikers — 25 million smart hikers, considering a 2009 study found that the decline in our level of fitness begins to accelerate after age 45. Because of the constant impact of hiking, it’s especially helpful for women trying to stave off osteoporosis. The additional health benefits of hiking are numerous: hiking regularly can lower your blood pressure by four to 10 points, reduce your chances for cardio vascular disease, reduce your odds of getting diabetes, help you keep weight off, lower your cholesterol and triglyceride levels and, perhaps most importantly, clear your head and help you maintain your sanity.
And it doesn’t discriminate on the basis of age.
Take Emma “Grandma” Gatewood. In 1955, at the age of 67, she hiked the entire 2,180-mile Appalachian Trail. That was the first time she hiked the AT; she did it again in 1960 at age 72, and again, when she was 75, in 1963. Lee Barry became the oldest person to thru-hike the AT when he completed the trail in 2004 at age 81. The oldest AT section hiker was 86 when he finished wrapped up the trail.
Closer to home, Triangle hikers have been trying to keep pace with Rod Broadbelt since  he started his monthly hikes, mostly at Umstead State Park, in the 1990s. Rod goes anywhere from 8 miles (in the dead of summer) to 22 miles (in the briskness of February) on his hikes, which often leave much younger hikers gasping for breath. On a hike last year he said his goal was to continue leading the hikes after he turns 80. He was 78 at the time.
And lest you be an older hiker and think you don’t have the knees for hiking, we have two words of advice: hiking poles. For just as full-suspension bikes have extended the riding lives of many an older mountain biker, and the over-sized tennis racket meant more control and less darting about the court for aging tennis players, so have hiking poles made it possible for the weak-kneed to keep on hiking. Plus, with poles, not only do you still get a good cardio workout, but your upper body gets to share the toning benefits of a hike.
We can’t blame Kathy for wishing she’d started hiking sooner; think of all the great places she’s missed seeing. But then, think of all the great places she’ll visit in the next 20 years.
Or 40. read more