I realized just how much on Sunday when I found myself in need of a second layer. Light gloves wouldn’t have been bad, either. Or a hat. There’d been snow a ways back, I recalled, and it was cold for a couple days after. But since? I couldn’t recall the last time a hike had started in 30-degree weather. read more 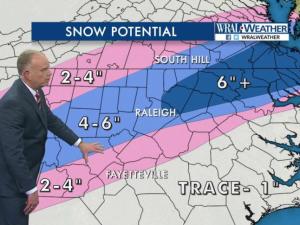 Answer the following: The weather forecast for this weekend is:

If you answered a), then you’ve already resigned yourself to spending the weekend indoors. Here’s a list of good books.

If you answered b), stick with us as we depart from our usual format, which is to recommend planned outdoor activities scheduled for the weekend. Organized bike rides, hikes, runs, that kind of thing. Odds are that anything scheduled throughout much of the state will be canceled should the forecast illustrated above (thanks WRAL Weather, btw) come true. No sense recommending something that likely won’t happen. Instead, some thoughts on how you, as an individual, can take advantage of the snowy cold weekend. read more

Wednesday, Hump Day. The memories of your weekend adventures are too distant to cling to, the prospects of adventure over the weekend ahead too distant to ponder. To help you over these midweek blues, every Wednesday we visually take you to a place you’d probably rather be: a trail, a park, a greenway, a lake … anywhere as long as it’s not under a fluorescent bulb. read more

Its skies are milky, indifferent. Its landscape monochromatic, a wash of grays and browns. Its weather harsh at times.And Lord knows the season is stingy with sunlight. The stuff of travel & tourism ad campaigns winter is not. read more