After a dang cold week we’re heading into a darn nice weekend, with mostly sunny skies and temperatures, brace yourself, reaching 60.

So if you’ve been hibernating so far this winter, now’s your chance to emerge from your den for an adventure. An adventure such as: read more 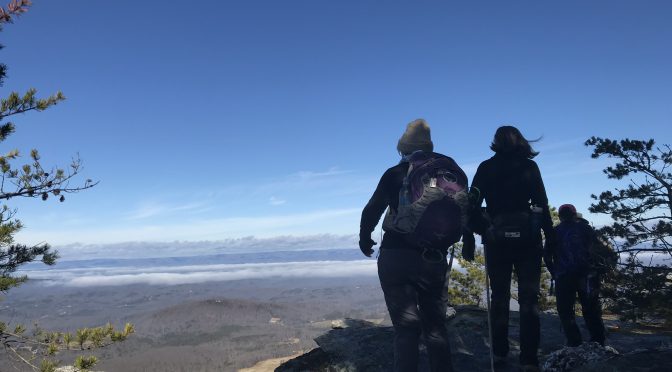 I knew I’d found a kindred spirit in Jim Plant when, during my interrogation of his intimate knowledge of Hanging Rock State Park, he said, “But then, I prefer to go off-trail.” Jim and fellow Friends of the Sauratown Mountains members Regina Rollins and Sarah Werner were standing on a rock outcrop with GetHiking!’s Alison Watta and me, surveying a vast stretch of undeveloped land in the 7,000-acre state park north of the Triad. read more 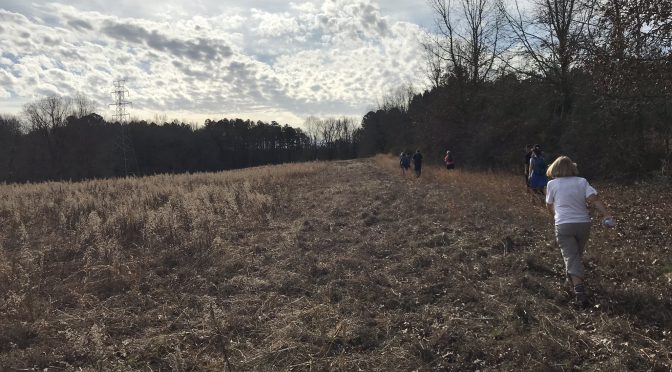 This weekend appears to be a carbon copy (here’s a history lesson, kids) of last weekend: lots of rain during the week, lots of sun on Saturday — and this weekend, Sunday, too. That being the case, some thoughts on how to spend a sunny first weekend of 2019:

As always, you can find more opportunities this weekend here:

=&4=& have a variety of adventures planned for the weekend. Check those options here.
=&5=& has an extensive calendar of what’s happening at its affiliates; check it out here.
You can also find more adventures right here, at =&6=& 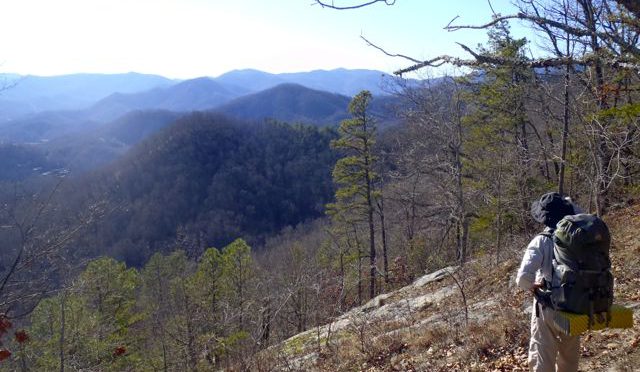 Winter is the honest season. Stripped bare of busy ground cover and a blurring canopy, winter is incapable of keeping a secret. Stone foundations from homesteads long abandoned lie exposed. Distant mountain peaks are revealed. Critters have nowhere to hide. It’s the perfect time to be in the woods.

Especially if you head off the beaten path.

Now, there are good reasons why that path is beaten. Not everyone is interested in a more raw form of adventure, fewer still are equipped. Whatever innate navigational skills our species may have had have since been relegated to the recesses of our brains in favor of more modern survival skills. Touch typing with our thumbs, for instance.

Relegated, maybe, but not deleted.

Every year around this time, because the woods become more open and welcoming, we rev up our GetOriented! Finding Your Way in the Woods program. We start with a basic introduction to map and compass and how to use the two in tandem. Then we head down the trail, and off, to match the imagery of wavy topo lines with the reality of a rolling landscape. At some point, those dormant navigational skills are retrieved from deep storage and our students experience an “Aha!” moment. Nothing makes sense, then — well, maybe not everything makes sense, but you can hear the tumblers fall into line.

Why is this skill important?

Think about a trail you hike on a regular. Your hike may vary by season, it may vary by time of day and by the weather. But you’re still walking along the same stream, climbing the same long hill, passing the same dilapidated tobacco barn and seeing the same view of the lake. Nothing wrong with this familiarity. But haven’t you ever wondered what lies beyond?

At Eno River State Park in Durham, for instance, the Cox Mountain Trail is a popular hike. It involves crossing a swinging bridge, it follows a rocky stretch of the Eno, and it has some good elevation through a maturing hardwood forest. It all makes for a good hike. Yet when you reach the summit of Cox Mountain, you notice that, to the south, the mountain plateaus for a third of a mile or so before dropping off on three sides. From your park-issued trail map you notice what lies beyond — about 600 acres — is in the park. Since it’s parkland, you figure it’s probably pretty wild (in fact, the tract is known as the Eno Wilderness). The unknown beckons: What’s over there?

At Umstead State Park in Raleigh you stand on the bridge spanning Crabtree Creek and look downstream. According to the park map there’s a sizable area that, again, isn’t served by trail but must harbor some hidden treasure, right? (Right: a stand of ancient beech trees, a former Civilian Conservation Corps camp, a short-lived Boy Scout camp.)

At Hanging Rock State Park you hear tale of a Cessna that crashed on the mountain more than a half century ago. Where? you wonder. And, Would anything be left after more than 50 years?

Sometimes you need these basic navigation skills just to find the trail. At the coast, in the Croatan National Forest near Maysville you’ll find the Weetock Trail. Well, you’ll find the northern and southern trailheads, both off NC 58, but sometimes finding the 11 miles in between can be a challenge. When blazes abandon you, a map, a compass and a basic understanding of topography can be the difference between a fund day of navigating the woods or an unplanned overnight.

Most people who take our Finding Your Way in the Woods class do so because they simply don’t like the feeling of getting discombobulated in the outdoors. Almost all leave the class with this goal accomplished. But they also leave intrigued by what lies beyond the confines of the blazed trail, by the treasures, natural and cultural, waiting to be found. They may not be inclined to abandon the trail entirely, but they know that if something does beckon from beyond that they can venture a little ways off the trail and find their way back. Navigational skills come in especially handy in this part of the country, where our state parks and our national forests in particular are criss-crossed with long-abandoned wagon roads and cart paths. Crossing one such path in the woods it’s impossible not to wonder where it leads — and where it once led.

Winter’s the ideal time to find out.

GetOriented! Finding Your Way in the Woods read more