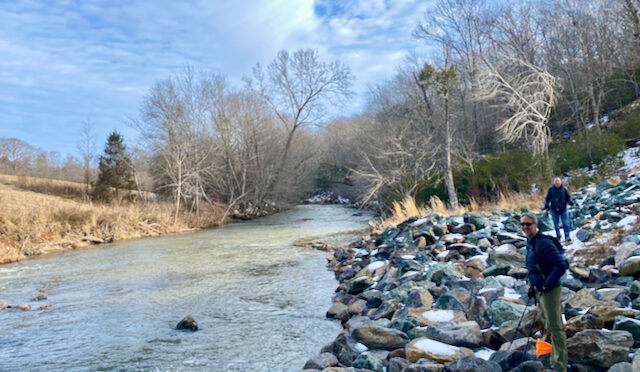 This morning I set out with a couple of buddies on one of their regular adventures and was reminded of a column I wrote a couple years back about free soloist Alex Honnold. Honnold is known as the climber who eschews ropes and other protection — “free soloing,” it’s called in climbing circles.

Bob and Henry aren’t free soloists; in fact, climbing may be the only outdoor adventure they don’t do. Among other things, Henry is section hiking the Appalachian Trail, while Bob starts his day with a 5-mile run, ends it with a 3-mile hike, and works in, say, a 20-mile mountain bike ride in between. The pair usually work in a paddle trip together every couple of weeks, a hike as well. Maybe they don’t scamper up El Cap without a rope, but for a couple of retired guys, they’re doing pretty good.

This morning’s adventure was a hike and while they were only going 8 miles, most of it was off trail. Some of it over cliffs, some through rhododendron hells, all of it on the 2-3 inches of snow and ice remaining from Sunday’s storm. I won’t reveal too much about the mile or so I hiked with them; for that, you’ll need to listen to next week’s GetHiking! Southeast Podcast. What I will say is that in retirement both have blossomed as adventurers, with both acknowledging that they are in far better shape today than when they left the workforce.

“I’ll just keep going like this as long as I can,” Henry said early in the hike.

Why do they remind me of Alex Honnold? Because among  their “golden years” cohort, what they do may seem similarly remarkable. Thing is, it’s not. While they may be the exception, they are not alone. And growing numbers of 50+ folks are joining the ranks and pushing themselves like never before. Folks who GetGoing After 50 is a topic we’ll be exploring at length in the coming months.

In the meantime, the 2019 post on Honnold follows. Marvel in his accomplishments, then think about what you might do that would cause you to flash your own Honnold “smile.”

Talking with author/climber Mark Synnott earlier this week about his new book, “The Impossible Climb: Alex Honnold, El Capitan and the Climbing Life,” I was touched by something vaguely familiar. Vaguely, and weirdly, because the book is about one of the most audacious physical and psychological feats of our time: Honnold’s ascent of El Capitan, a 3,000-foot near-sheer rockface in Yosemite National Park — without any form of protection to save him should he slip from one of the wall’s precarious microscopic holds. What could possibly be familiar about that?

Honnold has climbed, mostly without a rope, throughout much of the world on some of the globe’s toughest mountains. Despite living on what he describes as “the income of a moderately successful dentist,” he still prefers to live in his van, even when it’s parked in the driveway of his Las Vegas home. And after knocking off El Cap on June 3, 2017, at 9:28 a.m., how did he celebrate? By hanging for more than an hour on his Beastmaster Hangboard, a strip of hardwood with microscope indentions that he uses to build arm, finger and torso strength. Why the hangboard? Well, because he does this every other day as part of his training, and his epic climb just happened to occur on a training day.

So again, how could Honnold’s story even remotely feel familiar?

Then I thought about “the smile.” When Honnold successfully executed the hardest part of his El Cap climb — an especially tenuous move called the Boulder Problem — he turned to one of the camera’s documenting the climb for the film “Free Solo” and flashed a huge grin. That grin, says Synnott and others who know Honnold, is rare. “You see that smile,” says Synnott, “you stand in the presence of that, it washes over you.”

Then it hit me. I haven’t necessarily seen that smile before, but I have seen that look, the “one that washes over you.”

On our backpack trip into the Joyce Kilmer/Slickrock Wilderness a couple weeks back we were making our way down a particularly challenging stretch of the Slickrock Creek Trail. We were losing elevation at a dizzying rate — in one stretch, about 1,400 feet in less than a mile. The trail was overgrown, and it was criss-crossed by more than 30 downed trees — Joyce Kilmer-sized sentinels of ample girth. At one point, after a particularly challenging crossing, I looked up the trail expecting to looks of concern, at best, anger at the least. I didn’t see any Honnoldesque grins, but I what I did see surprised me. I saw people, many of whom were either retired or of retirement age, very focused on the task at hand. Not one person looked worried or defeated. All were in the moment. They knew a wilderness area would present challenges unlike what they’d seen hiking in a state park. That was why they were here: they were aware of the challenge, and they were embracing it.

Same thing a year earlier on our annual dive into Linville Gorge. A late start and a wrong turn left us a mile and a half from camp in waning light in the midst of a classic, homegrown Linville thunderstorm. We righted ourselves, then, a half hour later, wronged ourselves again. We ended up pulling into a makeshift camp at 11 p.m., low on water, wet, and five hours past feeding time. Yet the next morning, there was nary a word about the previous evening. Rather, everyone was eager for the day ahead.

I feel this presence on local day hikes. Someone who’s never hiked 5 miles before, who’s never hiked in 85-degree heat, shows up because she wants to push her limits. The hike may not be easy, it may not be entirely enjoyable. But they do it and you can feel their sense of accomplishment.

Some argue that Alex Honnold lacks a sense of fear, that his brain is wired in such a way that he doesn’t experience fear. Honnold pooh-poohs the notion (and an MRI scan of his brain reported in Synnott’s book appears to back him up), saying he feels fear all right, he’s just better at managing it than most (which he does in part by being extremely prepared). If you want something bad enough, he says, you figure out how to make it happen.

That’s what resonated with me, with Honnold’s story. The people who do our trips aren’t, for the most part, athletes who’ve dedicated their lives to training for the impossible. Most have jobs and have to deal with the day-to-day of survival. But, like Honnold, they’re driven by that spark to feel, even for just an afternoon or a weekend, truly alive. To feel good about themselves in a way that binge watching the latest Netflix series or buying a Tesla can’t touch.

To do for themselves what might seem, like the audacious free solo of a 3,000-foot rock face, the impossible.

Eager to flash your own Honnold smile? Here are some upcoming opportunities:

GetBackpacking! Intro to Backpacking. Our three-part class — including a gear session via Zoom, a 5-hour in-field training session, and a weekend graduation trip — will turn you from nervous novice to competent, confident backcountry explorer in time for the spring backpacking season. Our spring session starts Feb. 23; learn more and sign up here if you live in North Carolina, here if you’re in Virginia.