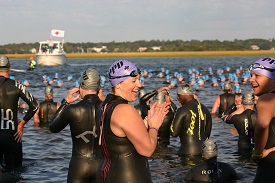 A glorious experience in a Dismal place, riding with the polar bears, avoiding getting lost (but what to do if you do). Just another diverse weekend of outdoor adventure in North Carolina.

“Remember that resolution you made to get outside and exercise more this year?,” asks Dismal Swamp State Park. (Hey, if companies are people and are entitled to a voice, certainly a great natural area is as well.) “There’s no time like the present to start!” And this chatty park would like you to start with its Resolution Hike this Saturday. Meet at the Visitor Center at 10 a.m., then explore what POTUS No. 1 and avid surveyor George Washington called “a glorious paradise.” The Great Dismal has a fascinating natural and human history (check out Bland Simpson’s highly entertaining “The Great Dismal: A Carolinian’s Swamp Memoir”) that can’t be captured in two miles, but it’s a start. read more

It’s a weekend that needs no introduction … .

Can it already be competitive 2-on-2 beach volleyball season? Yes it can, apparently, at least in Emerald Isle where the “2v2 Beach Volleyball Tournament – Summer Series” will be in full swing Saturday morning. Competition begins at 9, runs until noon, at the Western Ocean Regional Access. Fee is $55 per team, players must be 16 or older and pre-registration is required, by calling 252.354.6350. (You can get more details on the tournament at that number as well.) read more

Congratulations to the cyclists of Chapel Hill and Durham, who now live in Bike Friendly Communities.

That’s according to the League of American Bicyclists, which bestows its BFC honor on communities that have made an effort to make cycling safe, not suicidal. Chapel Hill and Durham made the list for the first time this fall, earning Bronze status (out of a possible Silver, Gold, and the coveted Platinum, of which there are only three designated communities: Boulder, Colo.; Davis, Calif.; Portland, Ore.). In the Triangle, they join Carrboro, which has been on the list since 2004 and is one of only 28 Silver communities nationwide, and Bronze Cary, a 2003 inductee. Elsewhere in North Carolina, Charlotte, Davidson and Greensboro are all Bronze BFCs. read more