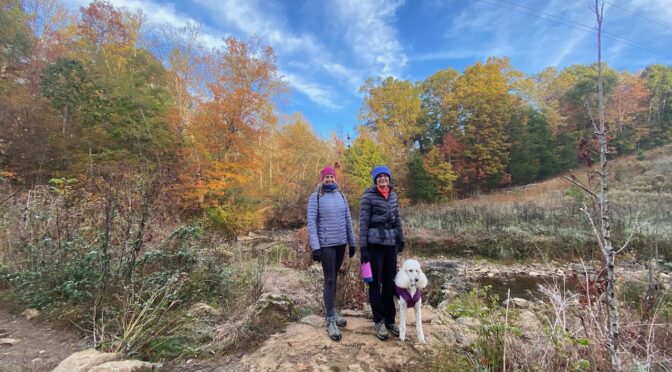 It was still on the murky side of sun-up when we gathered this morning for our weekly GetHiking! Friday Morning Hike. As we fine-tuned our clothing strategies for dealing with the cold — at 30 degrees, the coldest morning since April — we scanned the eastern sky for signs of the type of day ahead. Gradually, the rising sun revealed a mostly clear sky as it lit the autumn canopy above.  read more

Last weekend, we explored the longest uninterrupted stretch of the Mountains-to-Sea Trail along Falls Lake in Raleigh: the 7 miles from NC 98 to Creedmoor Road. We were struck by how, seemingly overnight, the woods had gone from a hint of green to full-blown leaf-out. We caught glimpses of the lake; mostly, though, we were enveloped in green. read more

Sometimes you’re intrigued by an ambitious goal — a marathon, for instance, or triathlon —  but are hesitant to commit. If only you could see it in action first … . Well, if you’ve been intrigued by the idea of an ultra — a footrace longer than a marathon — then head to Bald Island this weekend and check out the Third Annual Badwater Cape Fear, where runners will be doing either a 50K or 51.4-mile run, most of it along the lonely coastline between Cape Fear and Fort Fisher. read more

Looking for a good reason to make one last trip to the coast in 2012? Try the five-day Crystal Coast Countdown, which begins Friday and runs through New Year’s Day (Tuesday). A range of activities are scheduled for North Carolina’s mid-coast area; those of most interest to active types include: Friday, 9 a.m.: Guided Kayak Tour in the Pine Knoll Shores area; Saturday, 8:30 a.m.: Resolution Run (1-mile fun run and 5K) in Beaufort; Tuesday, 10 a.m.: Guided hike at Fort Macon State Park in Atlantic Beach; Tuesday, 1 p.m.: Penguin Plunge, in the Atlantic, from Atlantic Beach. read more